I was excited when my children were old enough to walk and hike the trails beside my husband and I. For me this meant a little less back pain and sweat combined with additional smiles and family fun moments. Though it never fails less than a mile into it, one of my three older one clunk out and the carry me routine begins. Don’t get me wrong, I love to hold them but at 60+ pounds walking a mile or more back to the car with one of them on my back is a hard road to toll. Taking my personal experiences into consideration I was overly excited to try out the Piggyback Rider. 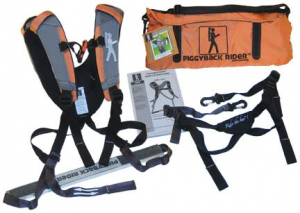 Appropriately named the Piggyback Rider™, this ingenious carrier is, quite simply, the last child carrier that you will ever need to buy. Made for children aged 2 ½ to 7 (and up to 60 pounds), The Piggyback Rider™ is quality and simplicity at its finest. Weighing less than three pounds and the size of a rolled towel, the Piggyback RiderTM bonds parent and child in active transport that is natural and instinctive. Rather than a seat attached to a frame or wheels, the brothers Jonny and Wayne Lifshitz designed a backpack with a shoulder mounted foot bar for a child to stand on, four integrated grab handles for a child to hold, and a safety harness to secure the child. The foot bar rests just below adult waist level, allowing the child to stand perched on the adult’s back and be engaged in active transport, rather than sit (and fall asleep). The Piggyback Rider™ is built strong and sturdy, made with high quality climbing buckles, webbing and a tempered aluminum bar. To boot, the entire carrier comes in a convertible multipurpose storage bag/mudflap!

Traditional piggyback rides require no special technique or training and involve complex frictional forces between carrier and rider, according to a study presented in 2009 at IEEE/RS-J International Conference on Intelligent Robots and Systems. The Piggyback Rider™ preserves these natural features and allows the adult to stand much straighter than the typical 30-40 degree slouch associated with the old-fashioned carrying method. Better yet, your little hanger-onner has a bird’s eye view over the landscape and crowd. The simplicity and ease of carrying a child with the Piggyback Rider™ is a revolution in child carriers – lightweight, natural and engaging. Now, when carrying Junior around the mall, through the amusement park, to the game, through the city or along the hiking trail, Mom or Dad can walk upright — with posture the envy of their peers! And now there’s also no more choking, eye gauging, hair pulling, tired arms.

Check out some of these features:

Older children love the height advantage, rest from walking and most of all the quality time with their parents. The Piggyback Rider™ has unlimited year-round use, while hiking, touring, shopping, walking, watching, exploring, wandering, bonding at amusement parks, carnival, sporting events, malls, markets and everywhere else you may go. And, in the end, it’s about more than just getting there; it’s about an active interaction between parent and child, bringing you closer together in any adventure or outing.

When it arrived and we pulled it out, read the instructions and even immediately after putting it on there were the wheels of second guesses on how a product so light and to the point could work for long periods of time. Our first test was right in our front yard. My husband ran, jumped and swung my oldest daughter whom is 7 and 64 pounds from side to side, up and down and every which way. Not only was she held safe in place by the Piggyback Rider’s design and her ability to stand on the bar provided but she had an amazing time doing it.

Next we took it for a longer run, walk and hike over a few rough trails with my five year old son in tow. He as well had a wonderful time though after about an hour he was tired of standing in one place and holding on, so we let him down for a little run time. The amazing thing is that even after that hour my hubby had not even broke a real sweat. Even though my son is pushing the 50 pound mark, he hardly noticed the difference. Only complaint was that it make him want to lean forward which is more of a reaction rather than need from use.

Over the course of several months, we have used the Piggyback Rider on at least a dozen occasions including hiking, shopping and event walking through the amusement park. This is honestly one of the best ways to keep up with a young child who like to run away in crowded spaces. We know where our youngster is at all times when using the Piggyback Rider and both parent and child enjoys the use a great deal. In fact I think it helps me burn a few extra calories along the way.

Would we buy the Piggyback Rider again? YES! It has been the easiest product of this type to travel with, light weight, portable solution for carrying along our older children (ages 5-7). It works and is a lot of fun for them and easy on me as a parent to use.

BUY IT: The Piggyback Rider is available on Amazon.com. It is also available at select retailers in the USA.