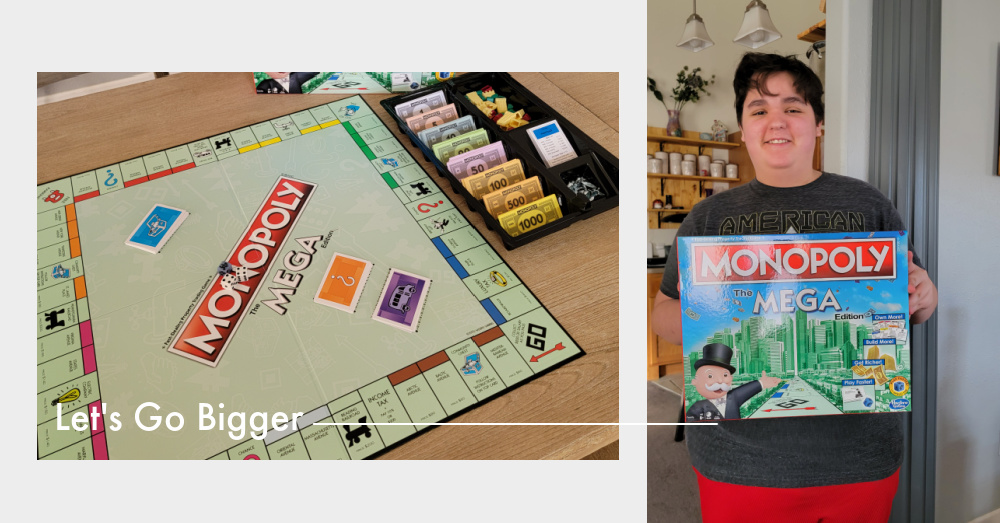 Family game night is a big deal in our household. It is one of the few family activities all of my children, even the teenagers, still enjoy. We usually order in a meal and sit down to an hour or two of game play. This gives us a chance to relax and reconnect during our busy lives especially during the holiday season. This year is extra special since the kids are homeschooled and we can enjoy board games during the afternoons as well. It is a great let’s take a break destress period.

One of the most requested board games of late is Monopoly The Mega Edition. Monopoly in general has always been a family favorite but this new bigger edition adds just that extra perk of more peeking the continued interest of everyone at the table.

Monopoly The Mega Edition is the same classic board but bigger and we all know bigger is better. Introducing nine new properties including seven new states to the game brings on the addition of new rules, the ultimate competition and loads more fun.

The massive game board includes twelve new spaces, including nine properties never seen before. For the first time ever in Monopoly, you can buy: California, Florida, Maryland, Massachusetts, Michigan, New Jersey, South Carolina, Arctic Avenues and the Gas Company.

Monopoly The Mega Edition is the first Monopoly game to include $1,000 bills! Anyone else totally exited for this new addition? I always felt special being the one at the table still holding on to the classic $500 bill or seeing them stack as I head off for a game night win but the $1,000s bring that extra bit of richness to the game making it even more competitive. In our home, it is a bragging moment to be the last one who hasn’t cashed in their coveted $1,000 bill!

Introducing the new Speed Die to the game. Now, those who also play Monopoly on Nintendo Switch are familiar with how this special die work. It in fact makes the game play much faster! We found that for a player board of four, it takes about an hour and a half for a full game. You can however still play with the two classic dice for a longer version. Be warned after hour three, we gave in an called it a night using this method. BOO!

Those that are new to the Speed Die, this is how it works:

The money bag became the first new token added in over 40 years in 1999. I had never seen this iconic piece until Monopoly The Mega Edition. It has quickly become my favorite player token and I snag it every chance I get.

Skyscrapers are used in Monopoly: The Mega Edition and there are only eight available for purchase in the game. They cost the same as the houses and the hotels, but they are the next purchase option after you have placed hotels. Skyscrapers definitely offer an advantage as it ups the rent that much more. Just as an example with a Skyscraper the rent on Mediterranean Avenue is now $750 and on Boardwalk it jumps to $3000. This can mean a much faster bankrupt process for other players.

Just a few new rules are added to Monopoly The Mega Edition. We have already mentioned a few with the speed die and bus additions. Now when you roll doubles, it cancels out the speed die. When you roll triples (both classic die and the speed die), you can elect to take your token to any space you wish on the board. Railroad properties can now be improved by building a Train Depot (cost: $100 in addition the the property cost). This allows you to double the rent when another player lands on your railroad with train depot attached. If you hold all title deeds of a color set, then you can charge triple when a player lands on your property and you can being improving (aka: building houses) on properties once you have all but one in a color set. I am sure I am forgetting a few more but that just leaves a bit of unknown for your family to discover.

With all the changes, additions and bigger board – Monopoly The Mega Edition is a win, win for game nights!

Monopoly The Mega Edition is available for purchase from Winning Moves, Amazon and in your local big box stores nationwide.

Have you played Monopoly The Mega Edition before? Share your thoughts with us in a comment below and don’t forget to enter to win a collection of games from Winning Moves including this one and more here: Winning Moves Games Are Perfect For The Holiday Gift Giving Season + Huge Game Prize Package Giveaway