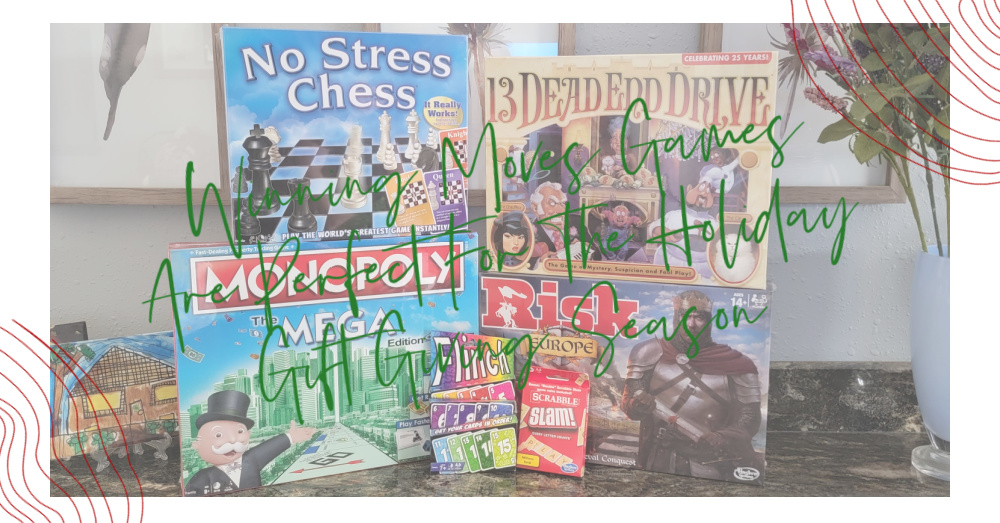 When it comes to buying gifts during the holiday season, I always look at board games first. Family game nights are a big deal in our house and sharing our love for all things togetherness is important. There is nothing better than a evening of fun, competition and family. For this reason and more, we think Winning Moves Games are perfect for the holiday gift giving season and encourage you to checkout their selection when making your shopping decisions this year.

Winning Moves USA (WMUSA) is a leading maker of board games, card games, and puzzles. Since WMUSA’s first year of operation in 1995, the company has forged a close relationship with one of the world’s largest game companies, Hasbro, Inc., owner of Parker Brothers and Milton Bradley. As a result, many long-lived Parker Brothers and Milton Bradley games are now marketed by WMUSA!

No Stress Chess, a game that will help you learn the world’s greatest game – Chess. You can play instantly because the special game board guides you to set up your pieces and each card in the innovative deck shows you how to move the piece it pictures. You just set the pieces on the board, shuffle the deck, and begin to play! No Stress Chess teaches players the moves of all the Chess pieces. The game is played on a regulation Chess board, but doesn’t require the movement knowledge or planning of Standard Chess. No Stress Chess can be played at several levels of difficulty, gradually introducing players to Standard Chess in incremental steps. When you’re ready, just flip the board to its Standard Chess board side and play the authentic ‘king of games’.

With this revolutionary chess teacher, you’ll be playing the world’s greatest game in no time at all! unlike any other chess teacher, no stress chess teaches you how to play using illustrated cards and an illustrated two-sided game board. includes two-sided chess board, 17 Charcoal pieces, 17 ivory pieces, 56 action cards, black plastic card tray and instructions. For two players.

13 Dead End Drive first hit the scene in 1994. Now this fan favorite is back, by popular demand, to entertain a whole new generation. Your goal is to be the last surviving heir and inherit Aunt Agatha’s fortune. A motley crew of Aunt agatha’s friends and employees are gathered at her Mansion for the reading of her will. Only one of these 12 specially invited guests will inherit her loot. Who will it be? Old Hickory her gardener? Her best friend Lulu? Poopsie her fluffy Cat? Or, one of Aunt agatha’s other nearest and not-so-dearest?

Scrabble Slam is the best-selling, fast-paced and easy to play card game version of Scrabble. Start with any 4-letter word on the table like “CAKE” and yell out “Ready, Set, Slam!” and the race is on. Quickly change the existing word, 1 letter card at a time, to create a new word like “BAKE” then change it to “BIKE” and so on. The first player to play out all their cards wins!

All the fun of Scrabble in a word-changing, card-slapping, fast-playing card game! Compete with your friends to change the word on the table using only the cards in your hand. Get rid of your cards first to win the game! Includes 55 cards. For 2-4 players, ages 8 and up.

Risk Europe is an enhanced game of conquest will excite gamers with hours of battle and strategizing to control Europe! Each player steps into the role of a medieval king and competes with a full army to expand their kingdom and take over Europe. Through shrewd tactical planning –and a little bit of lucky dice rolling- one player will conquer Europe and reign supreme!

Step into the role of a medieval king as you conquer Europe in this tactical strategy game. Control the crowns. Control Europe. For 2-4 players and ages 14+.

Flinch is the original and ultimate Stockpile card game! Created in 1905 this American classic is back to entertain a whole new generation of card game players. If you’re the first player to play all your cards in sequential order, you win!

The same classic board we all know and love PLUS 9 new properties including 7 new states! In Monopoly the Mega Edition, you’ll be able to build skyscrapers AND the game will play faster thanks to the Speed Die – invented by Winning Moves! Winning Moves Games was founded in 1995, and is a leading producer of iconic board games, card games and handheld puzzles. With a talented group of designers, developers and marketers, our mission is to provide happiness to consumers by offering classic, retro, cool and fun games for play with friends and family. Monopoly The MEGA Edition is recommended for everyone ages 8 and up, for 2 to 8 players.

Enter to win a Winning Moves Games Prize Package below!

Two winners, each will receive a Winning Moves Games Prize Package including: No Stress Chess, 13 Dead End Drive, Monopoly The Mega Edition, Risk Europe, Flinch and Scrabble Slam. MSRP: $149.70. Giveaway open to entrants living in the US. Must be 18+ or have parents permission to enter. Only one entry per household allowed. Prizing and samples provided by Winning Moves Games. Giveaway ends December 2, 2021. Visit Giveaway Terms & Conditions for additional details and rules.