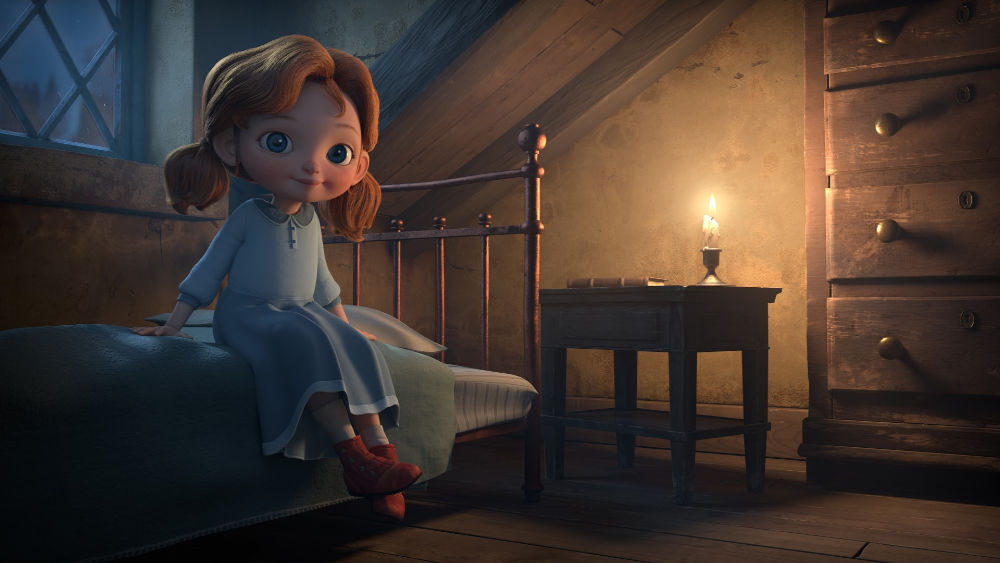 Just in time for the holiday season, the Emmy nominated animated special ANGELA’S CHRISTMAS is now available on DVD and digital download in the U.S. The half-hour holiday film is based on the popular and only children’s story from Pulitzer Prize-winning author Frank McCourt.

Netflix original short film, Angela’s Christmas is a new, family-favorite Christmas classic that celebrates the magic and generosity of the holiday season. Set in Ireland in the early 1900s, ANGELA’S CHRISTMAS is a funny, heart-warming and poignant story about the power of family and the innocent desire of a child to ensure everyone is safe, warm and loved at Christmas time. The film tells the story of six-year-old Angela, who – while attending mass on Christmas Eve – notices the statue of Baby Jesus lying in the manger. Worried that the underdressed statue will be cold in the cavernous church, Angela decides to “rescue” the statue and bring him home to warm him up.

The film stars Oscar-nominated Ruth Negga (Loving, Preacher) in the role of Angela’s mother, and Lucy O’Connell (Oscar nominated Song of the Sea) as Angela. The film is written by Will Collins (Song of the Sea, Wolfwalkers) and Damien O’Connor (Anya, Doc McStuffins), and directed by Damien O’Connor. Ellen McCourt, Frank’s widow, serves as an Executive Producer on the project and Malachy McCourt (Brewster’s Millions, The January Man, One Life to Live), an Irish-American actor, writer and politician, and Frank’s brother, provides the narration. ANGELA’S CHRISTMAS is produced by award-winning animation studio Brown Bag Films and distributed by 9 Story Distribution International.

The film also features an original song from 2x Grammy award-winner Dolores O’Riordan, the late singer of the hugely popular Irish band The Cranberries. The DVD release features a Making Of documentary which includes interviews with Ellen and Malachy McCourt.

Our thoughts: Angel’s Christmas is a beautiful tale that reminds us of the meaning of family, love and bringing comfort to those in need. It brings a few tears and lots of joy to see the togetherness even through hardship. It is a lesson I am proud to share with my youngsters and hope you will too!

Angel’s Christmas is available on digital (streaming) through Amazon.com, iTunes and Google Play. As well as on DVD in-store at Walmart and online through mass retailers.

Giveaway open to US/CAN only. Must be 18+ or have parents permission to enter. Only one entry per household allowed. Prizing and samples provided by Angela’s Christmas. Giveaway ends December 23, 2019. Visit Giveaway Terms & Conditions for additional details and rules.