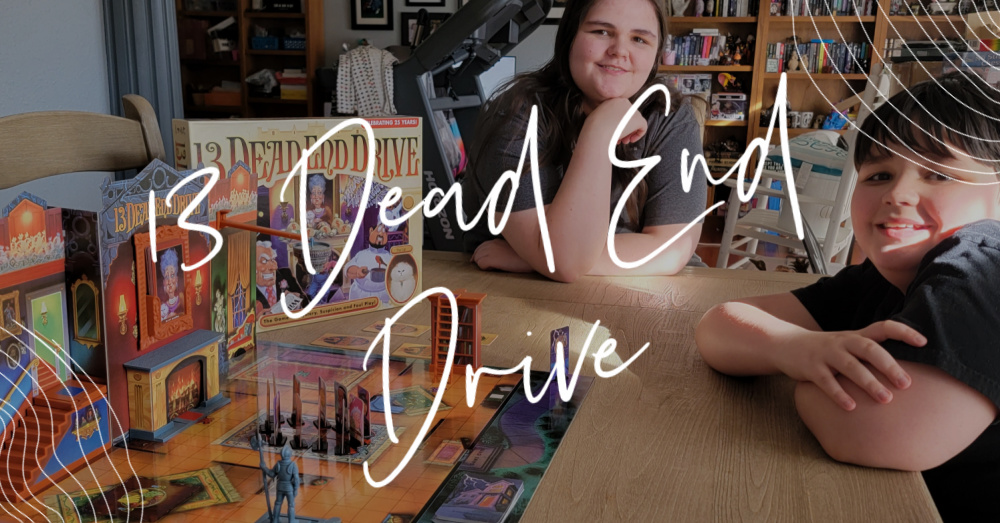 Let’s have a fun holiday game night! 13 Dead End Drive is a fun bluffing game where you try to conceal your identity from your opponents in order to be the last one standing to win Aunt Agatha’s fortune. Each turn you must roll the dice and then statically move your characters or others in order to throw them off your scent. Originally created in 1994, this comeback king, 13 Dead End Drive has quickly become a family game night favorite around our house. Even my oldest son (age: 27) called me because he noticed I posted gameplay on Instagram and instantly said it was one of the games he wanted for the holidays.

It took us about 15 minutes to put together and we made a few mistakes originally that had to be corrected. My suggestion is to reach the instruction manual carefully. The first build is always the hardest. You do not take all the pieces apart when you put it away. So, the second build took maybe 5 minutes tops.

Who will inherit Aunt Agatha’s fortune?

Aunt Agatha has passed away without any surviving relatives – so now her fortune is up for grabs! Her 12 friends and employees are all anxiously awaiting the reading of her will. But it says only one will inherit her fabulous wealth. She has left her estate to her favorite person (or cat!) – the one whose portrait is shown hanging on the wall. Will it be you?

You can win the game in three different ways:
1) Move your own player’s identity piece out of the house while your portrait is on the wall.
2) If you are the only player left with an character in the game. Yes, this does happen more often than not.
3) If your portrait is hanging on the wall, when the detective enters the main entrance of Aunt Agatha’s house.

The Portrait holds the key to winning!

The portrait above the fireplace contains cards for each character’s identity plus Aunt Agatha. When a player rolls doubles, they may decide to change the portrait or leave it be. Now matter which of the three ways to win happens, your identity being on that portrait is a requirement.

The Chauffeur might not make it through the night!

It’s hard to stay on your feet at 13 Dead End Drive. The board is a 3D house with several traps inside for the unwary – a toppling statue, a shaky chandelier and more! If you move a character to a trap space, you get to draw a trap card that might enable you to spring a trap and “knock off” your opponent’s identity. You may choose to bluff by moving your opponents’ characters towards the entrance or moving your own character onto a trap space, but beware as the next player may hold a trap card that will send you to your demise.

You will inherit Aunt Agatha’s vast fortune and win the game if: The Detective pawn reaches the inside of the house and the character portrait that matches a surviving pawn that you control is shown hanging on the wall. Detective cards are mixed in with the trap cards. Each time a player pulls a detective card, he moves one step close to the door.

So, who will it be? Which one of her motley crew of friends and employees will walk away with Aunt Agatha’s fortune? Will you be the master of deception and take home the win?

Have you played 13 Dead End Drive before? Share your thoughts with us in a comment below and don’t forget to enter to win a collection of games from Winning Moves including this one and more here: Winning Moves Games Are Perfect For The Holiday Gift Giving Season + Huge Game Prize Package Giveaway