Thank You to Inception Media Group for providing me this movie free of charge in exchange for my honest review. 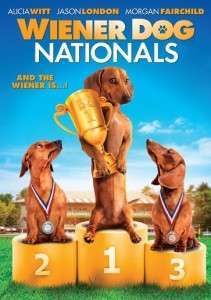 “A little boy (Julian Feder) and his family adopt a runt of a dachshund from a shelter and name her “Shelly,” in honor of shelter dogs everywhere. Despite all odds, the dog surprises the boy’s father (Jason London) when it places in the state trials of the illustrious Wiener Dog Nationals Race. The family pulls all of its resources to advance to the next round only to face strong opposition from the reigning champion dog, Princess and her owner Ms. Merryweather (Morgan Fairchild). Meanwhile, Melanie (Alicia Witt), one of the racing judges, is banned from the races by the head Judge (Bryan Batt) when she tries to help the family prove that Ms. Merryweather is cheating. Relying only on the dog’s skill and her young owner’s passion for the race, little Shelly and her new family must face the challenge of advancing through the cut throat world of the nation’s greatest wiener dog race, Wienerschnitzel’s “Wiener Dog Nationals.” One Race, One Nation, One Wiener!”

My kids are big movie and animal lovers so it was no surprise that they would be a fan of Wiener Dog Nationals. There were many laughs and “awwwws” coming from their room during the movie. From playing dress up with Shelly to the race itself, the movie was a huge hit. This is a great movie choice for young and old alike. It reminds us that shelter dogs are just as special as any and they can do anything as long as they are taught! Shelly’s talent shocks the entire Nation at the Wiener Dog Nationals. As an animal rescuer the movie definitely touched me. The movie is G rated so it’s suitable for anyone. With an expected release date of July 2, 2013, it’s sure to be a big hit in many homes across America. Wiener Dog Nationals has been watched several times in our home assuring me that this was a great pick for them! Definitely recommend it!

Connect with other Wiener Dog National Fans on Facebook!