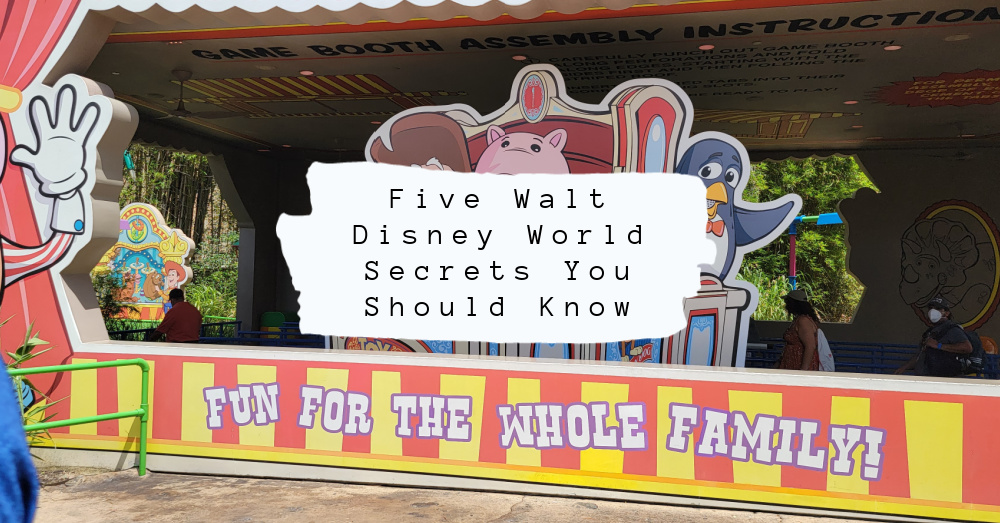 There are very few destinations that require the kind of extensive planning that a Disney World vacation does. As you are formulating your plans, consider these five things that you may not know. These will help you make the most out of your trip and save you money along the way.

You are better off skipping Extra Magic Hours.

Your best bet is to plan to visit a park the day after that park has had extended hours. Most visitors will have been there the day before and won’t return two days in a row.

Be in the parks for the first hour they are open.

For those that are willing to get up a little earlier on vacation, there are many benefits to being at the parks when they open.

First, the parks are less busy since people just aren’t awake and at the parks yet. You should plan to visit the most popular rides first since the lines will be the shortest. You can often ride more in the first hour than you can the rest of the day.

Secondly, the temperatures are cooler. Florida is hot for most of the year but the mornings are usually really mild. During really hot times of the year, it is advisable to spend the mornings and evenings in the parks with a break in the afternoon to get out of the sun.

Lastly, there are opening ceremonies at the parks that you can only see if you are there before the park opens. Families are often chosen to help out with the process and it’s a fun way to kick off the day.

You can put a Disney World trip on layaway.

Layaways have started to make a comeback in retail stores recently but they used to be very commonplace. For many years, Disney has been allowing vacationers to book trips and make payments online which can make paying for the trip seem much easier. There is a deadline for the balance to be paid so you’ll need to make sure to meet that deadline.

Use secret codes to help you save money.

Disney periodically sends out codes to people who have signed up on their various mailing lists. There is no known formula for predicting who will receive these codes but your best bet is to sign up for anything you can find. There’s a list to receive a free Disney World vacation planning DVD, for example, that not only gets you a DVD to watch but adds your name to their mailing list and should increase the chances of you receiving a discount code.

PhotoPass photographers are a good thing.

You know the aggressive photographers that always want to take your picture as you enter a theme park? Disney World has photographers but they are not aggressive and they are a really great resource for vacationers. The first time you approach one of the photographers, they’ll give you a PhotoPass card that you can then hand to all other photographers you encounter. At the end of your vacation, you can go online and type in your card info and all of your pictures will be loaded into your account to view and order.

If you don’t want them to take your picture with their cameras, the photographers are also glad to take your camera and take a picture for you as well.

Taking advantage of the photographers is a great way to make sure your entire group is included in pictures without excluding anyone. Most people don’t do much planning before heading out on their Disney World vacation but by just doing a few things beforehand to help prepare, you’ll be ahead of most other visitors and have a fantastic vacation.

Even beauty can be upside down!

With the bustle of holiday preparations in full force, taking a minute to enjoy the slow is a must.

My oldest daughter and I share one big love, coffee! For her, selections were somewhat limited at one time since she is lactose intolerant. Once she found RISE Brewing Co. Oat Milk Vanilla Latte, her fondness for java was renewed with a fierceness. #Ad, #risebrewingcoFYI

This nitrogen-infused cold brew latte from @risebrewingco enhances their signature organic coffee with a dash of dairy-free oat milk and organic vanilla extract from Madagascar. It's creamy, slightly sweet and refreshingly smooth. It's all good. http://gofyi.ly/5DBA670A

It was a good day! #keepgoing

Traveling is my passion, desire and everything I wanted to do in life besides being a mom. Though sometimes, especially during the holidays heading to new destinations with three grumpy teens and a tween can be a little stressful. This can make my anxiety and panic attacks which I try to hide come to the forefront. I learned over the last year that CBD can oftentimes help provide that bit of calm that I need to to get through it all and get back on track enjoying all that life and family has to offer.

Hemp Bombs offer a great selection of products including award-winning CBD gummies, lollipops (my newest fav as I do love a good lolli), Max Chill CBD Shots and even dog treats (Boomer's favorite as he tends to have that perfect husky personality)! They are a go to for all things CBD for us. #hempbombsactivate #sponsored

@snackmagic is a snack box that takes all the pressure off when it comes to holiday gifting. They are only service that lets people pick which goodies they get, making it simple and just what the recipient truly wants. #snackmagic

Be sure to visit motherhooddefined.com/SnackMagic and enter to win your very own snack box! #holidayguide

The Farnam Hotel in Downtown Omaha offers a boutique luxury right in the heart of city life. There is no better place for a weekend stay.

Enjoy the small moments in life.

The holidays are fast approaching and I'm learning to take joy from the little things. I do believe @ellisthebengal agrees. He seems to love lounging in the sun on our new @peachskinsheets as much as I do!