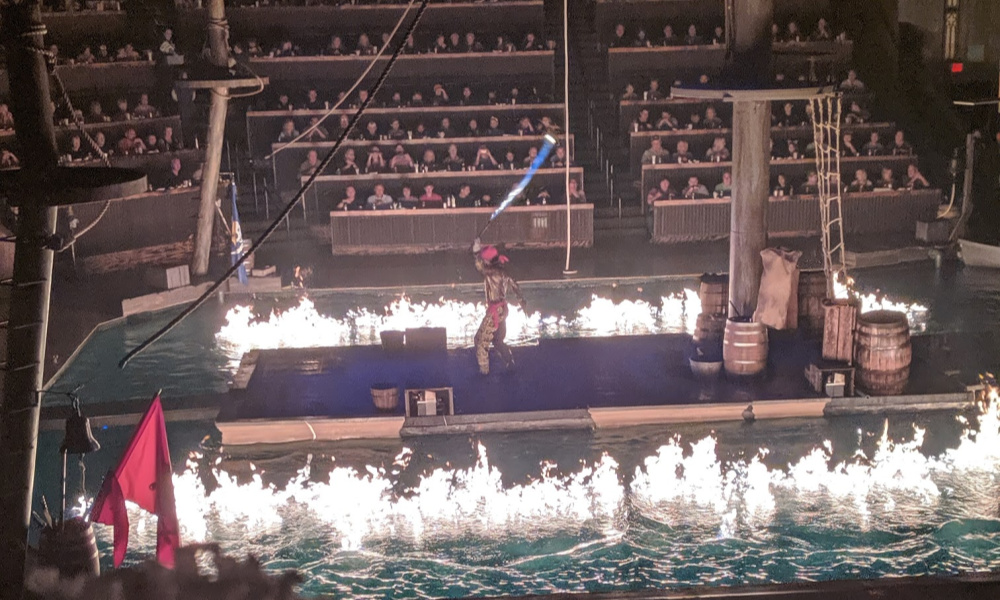 “AHOY, MATEY! WELCOME TO OUR SHIP!” The first mate greets you with a devilish grin as the stairwell ascends into the victorious vessel of the Pirates Voyage Dinner Show that stands before you. Upon entering the Pirate’s Village, there is a crowd of other landlubbers waiting to enter the show. Several are gathered around tables and the bar beyond while others pillage the gift shop for Davey Jones’ Treasures. While waiting to be seated, be prepared to sweat some; with so many warm bodies in one crowded area, it is a wonder the temperatures can get mighty high! It is suggested to arrive fifty minutes before your show so you can participate in the fun before the show. ​​​​​​​​​​​​​​​​​​Find more information about the show, dates and deals on mypigeonforge.com.

No venture to Pirate’s Voyage Dinner and Show is complete without watching the surprise on any boy, girl, lady or gentleman’s face as they are transformed into a pirate or mermaid in the Pirate’s Village. Complete their look with an eye patch and captain’s hat, also available for individual purchase in the Pirate’s Village gift shop. Just keep in mind, you might want to call and schedule the make-up session before you arrive. Adults can wet their whistles before the show with pirate-themed alcoholic beverages and nonalcoholic beverages are available for the younger ones!

Watch out for Blackbeard and Calico Jack in Pirate’s Village before the show! They are scouring the crowd to recruit a few junior pirates and petite mermaids to participate in activities during the show!

Enter into the hideaway lagoon just beyond the Pirate’s Village. Once inside and comfortably seated, two deckhands are prepared to take your drink order – which is unlimited. Wait patiently! Everyone must be seated before the show can begin. It is well worth the wait for the wondrous tale you are about to witness! Enjoy a fantastic four-course feast consisting of a Buccaneer Biscuit, Voyager Creamy Vegetable Soup, Cracklin’ Pan-Fried Chicken, Bone-in Pork Chop, Matey’s Mac N Cheese, Jolly Roger Sweet Potato Soufflé, and a Walk the Plank Peach Turnover. Vegetarian and gluten free meals are available by request just make sure to contact the ticket department ahead of time.

Two mighty vessels – one Crimson and one Sapphire – standing valiantly before you, but which crew will you be recruited for? Calico Jack the quarter master makes his debut on deck introducing captains and crews! The most famous pirate, the dreaded Captain Blackbeard, makes his entrance to recruit all surrounding the mighty ships as deckhands and pirates for the swashbuckling adventure that is about to begin.

Observe the two beautiful, topical birds as they fly around the indoor lagoon. See them return to their masters at the simple flick of a wrist. The deckhands must polish and scrub the deck before the feast can begin! But can they do it before Blackbeard returns?

“Shiver me timbers!” The seadogs scurry about swabbing the deck and bellowing a harmonious tune. Watch as Calico Jack and Captain Blackbeard lead the crews in an epic, unbelievable battle that breaks out with sword fighting and cannons blazing. See the pirates swing from ship to ship and leap from mast to mast while fighting to win the coveted Davey Jones sunken treasure! Cheer on the crew as they embark upon their quest to be the best at sea!

Watch the beautiful mermaids and their mesmerizing performance. The costumes and make up are fantastically designed to what one would imagine a mermaid to look like.

Is it dark in here?

Some may pick up on the ominous feel as the lights dim and the poor unfortunate souls of those lost sea crawl onto the deck. Davy Jones ghost instructs them to find Calico Jack and feed him to the fish. At the last second, he tells the ghosts to wait and directs Calico Jack to take the crimson and sapphire crews on a journey to become the best and whichever wins would be awarded his treasure! Make sure you watch after Davey Jones makes an appearance for a strange individual! Who is this strange someone? It is Salty the sea lion! See his trickery and quick thinking as Blackbeard attempts to throw them overboard for being stowaways. Captain Blackbeard has to watch Salty escape after he turns his back on them for a split second. Thank goodness they got away!

But wait! Oh no! Calico Jack has caught your crimson and sapphire captains in a tied love affair! This is an abomination in the eyes of the Pirate Code. Will Blackbeard’s quarter hand be able to keep it a secret? Will it cause both crews to tragically lose Davey Jones treasure? You will have to attend the show to see who wins Davey Jones’ treasures!

Enjoy a salty surrounding filled with dramatic lighting effects, realistic soundings, and powerful pyrotechnics! Pirates Voyage is conveniently located in the heart of Pigeon Forge at 2713 Parkway, adjacent to The Island and Margaritaville. The Pirates Voyage and Dinner Show does request no flash photography and video recording for the safety of their animals and other guests. They do accommodate all the needs of those who attend the show. Make sure and check with guest services if you have any special requests or needs!

After booking your Pirates Voyage adventure, be sure to visit My Pigeon Forge for more suggestions on what to see, where to stay, good eats and more!