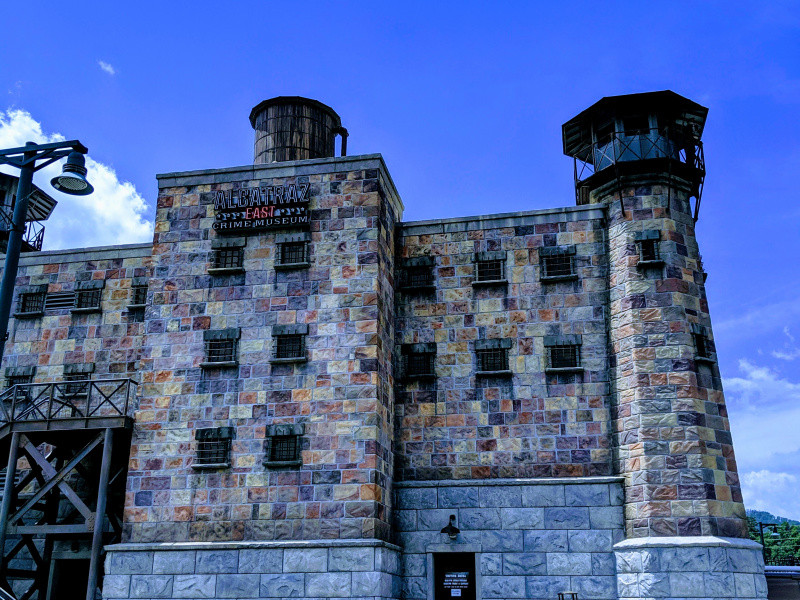 Everyone has heard of Alcatraz; whether it be through school books or tall tales shared from generation to generation of the haunts that abide there, but have you ever had the chance to explore in depth those who were sentenced to serve out time for heinous crimes? If crime fighting and dangerous hardened criminals draw your interest, then the Alcatraz East Crime Museum should top the list of sights to behold!

The Alcatraz East Crime Museum may appear daunting to some as you enter into the common area of the jail. Look up and you will notice the unmistakable black and white striped uniform of an inmate carrying on daily upkeep of the cells and walkway above. In the opposite corner, there is an officer keeping a close eye on him and watching for mischievous behaviors. The air inside feels cold and mysterious as you wander towards the dimly lit ominous stairway.

Just beyond the stairwell are many medieval devices that were used for torture and punishment. Image trying to survive during decades when the water funnel, heretic’s fork or iron muzzle were used on those who did not feel the urge to follow laws. Even those who were seen as exceptionally different or strange, such as pirates and witches, were not safe from the judging links of society. Be sure to observe everything displayed in this section!

Ponder the means used for punishment throughout time in many sections of the museum. Located further down the line are methods used for the death sentence in current day society. The electric chair and the gas chamber are displayed and both seem so horrific as you stand in front of the life size replicas. A heinous crime deserves a horrible sentence – even if it is a method that brings death.

Continue the trek on through the old Wild West. Brush up on infamous characters such as the glorious duo Bonnie and Clyde. Reminisce on the tales of hard times during the prohibition. Think you’re a hot shot? Try your aim in a race against time and shoot all of the targets!

Follow the flow of the crowd to the era of mobsters. What a time to be alive! Learn more about Al Capone and his crazy – sometimes violent – schemes. Have you ever heard of Saint Valentine’s Day Massacre that occurred in 1929? I bet not! I know I hadn’t until I participated in the tour. Pay close attention as you work your way through the mobsters and you’ll find the safe! If you think you’re a pro at puzzles, you may even want to give cracking the code a shot!

You can explore the strenuous effort it takes for law enforcement officers to create a reconstruction in the field or lab. You might even find fascinating impressions made by tires or shoes replicated as evidence for a case. Analyze how data is gathered to provide information into solving criminal cases. Discover how ballistics are used to acquire facts about weapons used in a murder or suicide and how the wounds caused the untimely death of a victim.

Observe mind boggling events that have occurred in recent and distant history. Look upon the belongings of little Casey Anthony that were used in court as evidence. Follow the loss of young Nicole Simpson. Read into many unsolved cases – who knows, you might even know more than is available to read! You can even sit upon the witness stand in a life size courtroom and tell your side of things if you so wish!

Remember our fallen heroes of 9/11 and the tragic event that occurred on our home soil in New York City. Pay tribute to their memory and watch the documentary short explaining what happened on that fateful day. Do you remember where you were or what you were doing when you learned that this had happened? I do and so do many others! You can read others memories and leave behind your own!

There is always more to discover and learn as life goes on and events occur, so it is never a bore to explore crimes of those long ago or in current history. The entertainment doesn’t stop at the end of the tour – available to you in merchandise – FBI uniforms and pistols or rifles. Be the criminal or the hero, create your own story!

Visit My Pigeon Forge to start playing your next fun-filled family getaway. Be sure to check out the packages and coupons available on mypigeonforge.com for deals on attractions like the Alcatraz East Crime Museum and more.