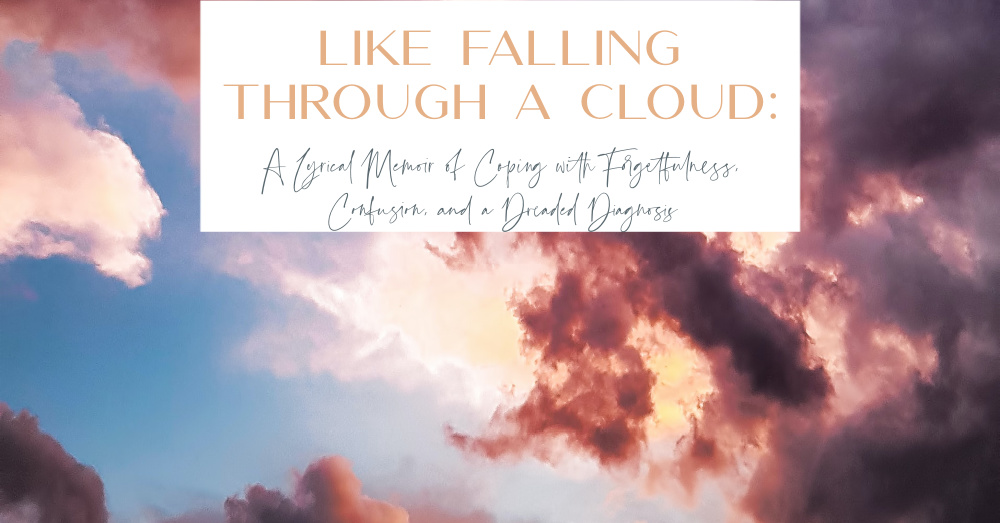 Excerpts from Like Falling Through a Cloud: A Lyrical Memoir of Coping with Forgetfulness, Confusion, and a Dreaded Diagnosis by Eugenia Zukerman

A few years ago my daughters told me they were worried about my forgetfulness, my loss of words, my confusion. They suggested, or rather insisted I get tested. A flutist, writer, artistic director, busy playing and performing, I simply refused. But when I finally agreed to trek uptown with my younger daughter I was tested. I was shocked that indeed my cognitive ability was compromised and would only get worse. I was quietly terrified and indignant, and when I got home, I went to sat down at my desk and stared at the wall for what seemed a long time. I did not cry. I did not move. But then, for some reason I took out a pen and paper and started to write. What spilled out is mostly in verse. Putting pen to paper helped me to find my own way through the brambles of loss.

What resulted is my book, a lyrical memoir titled Like Falling Through a Cloud: A Lyrical Memoir of Coping with Forgetfulness, Confusion, and a Dreaded Diagnosis

Here are three poems I’ve chosen from Like Falling Through a Cloud to which I’ve included an intro to each:

I think this poem speaks to the confusion and fear I was actually feeling in a hot crowded subway as I realized I had no idea to find my way out of the underground station. I remember having a mix of panic and self anger. “How can you be so stupid,” I remember telling myself. Yet I believe I was oddly poised and when I emerged from the station and I was able to compose myself and walk home, cooling calmly off.

I’ve returned to the city

where everyone is busy

subways are crowded and hot

folks are sweating a lot

and the trains are

and some man gets up

to offer me his seat

I’m totally turned around and can’t figure out

do I need to go back uptown

or change to the downtown track and how do

FIGURE IT OUT, BIRDBRAIN

I wander around the station

looking for an exit, any exit

JUST GET ME OUT OF HERE

A walk home will be good

I need to get my bearings

but I won’t be sharing

the story of my panic or pretty soon

I’ll be forced to wear

Here I am trying to be responsible, thinking about what I should be doing to get ready to leave my worldly goods to my family by going to my banker. At the same time I was imagining the idea my husband and I concocted, in a kidding mode, that we would put on deer suits, go out on the first day of hunting, and wait to meet our fates… hoping of course that the hunters would know how to shoot straight.

I’ve made a date

to know where things stand

when it comes to what I’ll hand

to my next of kin

so I should begin

to keep track of stuff

to see if there is enough

when I’m under the ground

I’m not being dramatic

but I can no longer be static

about what lies ahead

which oddly I do not dread

I want to avoid leaving a mess

for the family to assess

she left it this way

to keep trouble at bay

and to avoid a fray

I don’t expect to croak

but I don’t want to be

one hundred and three

which my mother’s achieved

I will stick with the plan

when the time seems right

we will have the delight

on the first day of hunting

and we’ll go out in the fields

to meet our fates —

the hunters  know how to

IN ORDER TO PROMOTE TRANQUILITY AND CERTAINTY

The parties were married to one another in a civil ceremony

define their rights and interests in one another’s property; and

each of the Parties has been informed of his/her rights and privileges in and to the property of the other under the laws…and each understands that under law their marriage confers specific rights upon each of them; and

in order to promote tranquility and certainty…the Parties desire to define and limit by the Agreement the interests, rights and claims which accrue to each of them in the property of the other by reason of their marriage to each other; and…

respective antlers, then each understands that the rights and claims of the other

will be null and void if  he or she should be the receiver of the first bullet; and

but let it be noted

that the certainty of  tranquility will have been perfectly promoted.

Here I am on a spring afternoon reveling in the beauty and bounty of nature.

and the tomatoes are bulging

to burst toward the sky

in colors that astound

while on the ground

our once hearty kale

has been ripped out by rabbits

who attack at dawn

leaving the crop tattered and torn

not kale or tomatoes or cucumbers

or the glorious flowers that fill our fields

or the people we adore

and though I know my days are numbered

by thoughts of my demise

I do not embrace

a way to make the rest of my stay

on this problematic planet

As for the deer suit I promised to don

I don’t think I’ll put it on

and I have a strategy to keep on keeping on

give thanks for another day