One of the most outstanding and instantly recognizable voices in music, singer, songwriter, and actor, Josh Groban announces the next stage in his live career with his “In the Round Tour,” which begins October 2nd in Boise, ID, and continues through mid-November.

The “In The Round” tour will give fans a one of a kind concert experience. Placed in the middle of the floor this 360 stage will allow Josh to interact with fans from all sides of the venue and hear Groban sing classic songs that span his illustrious 12 year career. The “In the Round” tour builds on the concept of Groban’s 2011 “Straight To You” world tour, bringing the intimate feel of a theater experience to an arena setting. 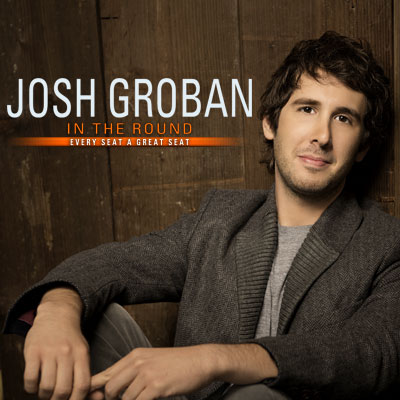 It has been a vision of mine to do a tour in the round for a while now, it was just a matter of when was the right time. I have always had moments during the show where I walked through the crowd and interacted with the fans. I felt that now was the time to bring it all together. I can’t wait to bring music from throughout my career, great fun and new experiences to my fans.

Groban will be joined by an ensemble of world class musicians – featuring Andre Manga on bass, Ruslan Sirota on keys, Pete Korpela on percussion, music director Tariqh Akoni on guitar , Dave DiCenso on drums , Christian Habel on violin and Daniel Rosenboom on trumpet. In addition, a local orchestra and choir will be added in each city.

Josh Groban’s “In The Round” U.S. tour dates are as follows:

For more information about Josh Groban’s “In the Round” tour, or to buy tickets, check out the link below: http://bit.ly/GrobanRSVP.

One lucky winner will receive a 2 Josh Groban “In The Round” Concert Tickets!

Giveaway ends June 15th at 11:59pm, open US and Canadian, ages 18+. Winner will be allowed to choice their location based on the US&CAN tour dates provided above. To enter please use the Rafflecopter form below. Good luck.