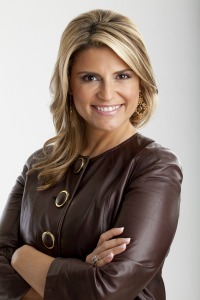 I had a chance to sit down and chat with the creator of a few of the most popular cartoons in the US and discuss her newest projects.  Angela Santomero is the mastermind behind the television shows: Blue’s Clues, Super Why, and Daniel Tiger’s Neighborhood.  As I prepared, I sat down in my thinking chair to think, think thiiiiiiink (but more on ridiculously catchy songs later) and ask her about Creative Galaxy and the new children’s shows exclusive to Amazon Prime.

Shows created by Angela Santomero are ones that I never feel like I need to screen before my children watch.  They’re wonderful and full of lessons for the children to take away with them long after the screen’s turned off.  There are three coming to Amazon Prime including Creative Galaxy which went live just a few days ago.  You can watch the first episode here

even if you’re not a Prime member yet.

Brooke: Could you summarize your new show Creative Galaxy for readers who may not have heard about it yet?

Angela Santomero: Creative Galaxy is literally a galaxy that we’ve created.  There’s creative elements, so there’s a planet for every art medium.  We have a drawing planet and a painting planet, and our little alien preschooler named Arty is the star of the show and he has a little sidekick named Epiphany who’s a cute little shape shifter friend.  He lives in the Creative Galaxy and has friends, and parents, and a little baby sister and when there’s a problem he wants to fix it with art.  So he’s that kind of kid.  He’s a maker and he’s a creative kid and he’s always thinking creatively, always having these ideas.

He can create, literally drawn on the screen every episode, a creative spark rocket ship.  It becomes real and he hops in it and he flies to different planets depending on the problem of the day.  And then will literally bring back something that he makes home and that will fix the problem.  In one of the episodes, his friend Jackson is missing his puppy ‘Splatter’ and we don’t know where Splatter is, so we go into the Creative Galaxy and go onto the drawing planet with Jason Priestley, who plays the voice of Sketch, and shows the kids that they can literally draw a picture of Splatter just by using shapes and lines put together.  Once they can draw the picture of Splatter they can show it around the Creative Galaxy and use it to find her.  So basically you’re using art to solve problems.

Every Episode also has a live action component so you can see some of the actual crafts that we do during the episode; real kids making those crafts using so many things that you can just find in your house.  So it’s such a great Summer series in that sense.  It just can spark all of these ideas that you can do.

Brooke: You’re to help us parents a lot with the “I’m Bored” syndrome!

Angela Santomero: I hope so!  I hope so.

Brooke: Now you’re the creator for Creative Galaxy, and involved with Sara Solves It and Wishenpoof on Amazon right now.  Is that right?

Brooke: How has it been working with Amazon to do these exclusive pieces?  I’m sure it’s a little different than the traditional Nickelodeon and things like that.

Angela Santomero: You know, it’s really about the relationship with the head of the network and Tara Sorensen is an innovator, a creative thinker, and she prides herself in picking things up that no other network would pick up and so the idea of hitting the arts for Creative Galaxy so strong, she tears up every time.  Which, you know, most of us do every time we talk about how the arts are being stripped from the classrooms and so this idea to come around and do a show that kids will love and will be a hit for them, you know, they’ll want their birthday parties to be our characters, but at the end of the day there’s all of this arts curriculum in there.  They’re being exposed to Jackson Pollock and Seurat.

And then with the other shows it’s the same.  Like in Sara Solves It being all about math and a girl who’s a strong detective who literally solves problems using math and different cognitive aspects in order to bring that back.  It’s just a really great female go-girl empowerment type of show that’s a musical.

Then we got excited about Wishenpoof which is about a little girl who finds out that she actually has wish magic and that she can make her friends’ and her wishes come true.  It’s all about celebrating imagination and founded in a curriculum that’s mind in the making.  It’s literally showing kids how to look at somebody else’s perspective or be empathetic or all of these executive functioning skills.

Brooke: Which is really important because you see a lot of children struggle with that lately.

Angela Santomero: Well absolutely.  And then wrapped in this really great humorous, funny, adorable, beautiful show. . . and everything I do is always so married you know what I mean?  Depending on which aspect I’m talking about, but yes exactly so giving them the tools of what to say and how to say it, to stick up for their friends or to believe in themselves, all of these big empowerment messages that we’re creating beautiful songs for.  So in Creative Galaxy the music is ridiculously sticky and there’s music for every planet, so that when you’re painting we’re hoping the kids are thinking a little painting song.  Sort of thinking this through because we want to hit them in all of their senses, right?  So this idea to have little ditties that celebrate art was really exciting for us too.

Brooke: I also heard about an app that’s going to go with Creative Galaxy which is really exciting for tech-centered parents.  Is that something we can expect soon and could you tell us anything about that going along with your show?

Angela Santomero: I believe it will be available next month.  We’re just making sure that it’s as great as the show is.  We just really want to launch it when it’s ready and next month it will be.  It’ll be this idea that we’re all about interactivity because when you can do something and make something, no matter what it is, you’re going to learn and master the concept a little bit better.  So the idea of having and app is just so neat for Creative Galaxy because then the kids can make along with Arty if they don’t have the opportunity to do it in their real home.  So we really just want to hit them and extend the learning everywhere, so an app just makes so much sense to give that to our viewers as well.

Brooke: I actually have a question from a reader that I had as well.  I admit that I am young enough to remember sitting down at eight years old with my little sister to watch Blues Clues.  So now I get to share those same kind of shows and things with my own sons, so I want to know out of all these shows that you’ve worked on, who has been your favorite character?

Angela Santomero: You know, that is like asking, “Who is your favorite child?”.  There is no way I could answer that but I have to say that each show is so it’s own show.  It is.  I know this sounds crazy but it’s just like my kids!  You know, it’s like they each have their own personality.  Blues Clues was the first and you know what they say about the first right.  As you’re going through it and you’re making mistakes and celebrating all this stuff with your first!  And so I’ll remember that fondly forever and continue to do more stuff for Blues Clues forever.

And it’s the same thing.  I really have a hard time letting go.  We’re still doing more Super Why episodes.  That’s all about reading and superheroes with the power to read because I have a million stories that I feel like I could tell with that.  And with Creative Galaxy I feel like I could continue doing this for years and years because there’s an infinite number of creative things to showcase.  But all of this just has that same sense of propelling the story forward, with using that “interactivity”.  Then Daniel Tiger’s Neighborhood, same kind of thing.  We literally are just hoping that it befriends the home viewer and brings them in so that they can master the concepts.  So there’s a lot of similarities between the shows, so I cannot pick a favorite.

Brooke: Daniel Tiger’s definitely a big one in our house.  I have a four-year-old who at night, when he has his hugs and kisses, goes, “Ugga Muggas?” because he wants an Eskimo kiss.

Brooke: It sticks with you!  That’s what I love so much about these shows.

Brooke: Thank you so much for sitting down with me for this interview.

Angela Santomero: Oh absolutely.  Thank you so much.