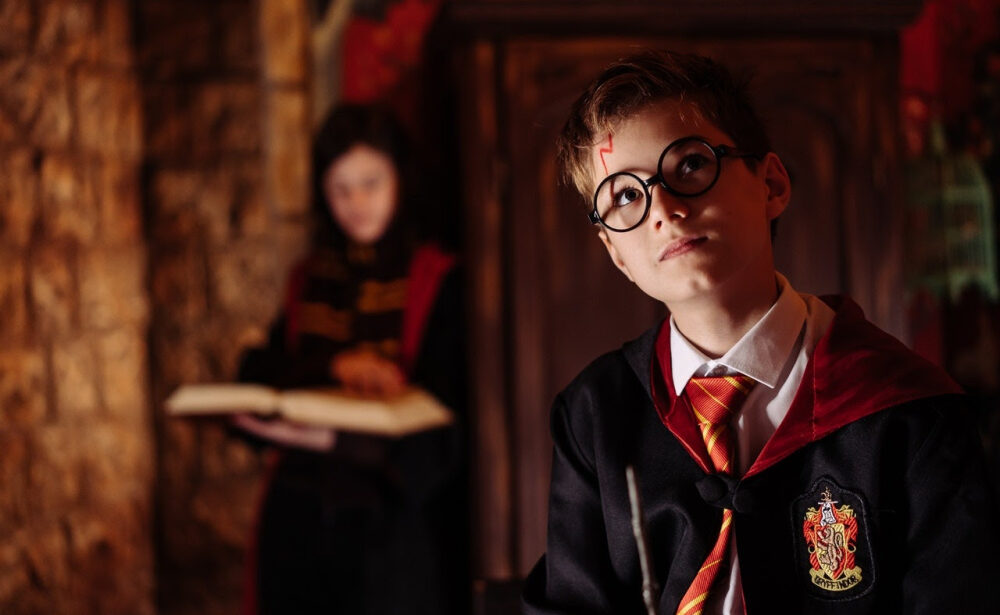 Harry Potter is an extremely popular multimedia franchise that originally started as a book series written by J.K Rowling. The series became a hit for those of all ages thanks to Rowling’s timeless and charming writing. Even before the entire seven-book story was completed the popularity of the books had audiences demand movies that would adapt the series characters and fantastic settings onto the silver screen. In 2001 “Harry Potter and The Sorcerer’s Stone” was released to much acclaim and finally brought the imagination of Rowling and her fans to a visual medium. The movie was a success due to its focus on staying accurate to the books and maintaining good communication with the author as she was still finishing the book series and needed to give them hints that both wouldn’t contradict what she had planned while also not spoiling any of the details she wanted to surprise readers with. Twenty years later the entire story of Harry Potter and his friends had been told in movie form and even more, movies have been made about the rest of the wizarding world that the series takes place in. Harry Potter has grown from a record-breaking book series into having record-breaking movies and video games.

Harry Potter has done as a franchise in the past decade:

With what Harry Potter has done as a franchise in the past decade it should be no surprise that the upcoming 20th-anniversary reunion of the cast. is such popular movie news. For the first time since the last movie in the series wrapped filming in 2011, the entire cast will reunite for a television special being aired on HBO Max. The director of the first two movies Chris Columbus will also join the cast for the anniversary special and will be talking about the history and behind-the-scenes stories that go along with making a movie series like Harry Potter that has inspired millions. Not only will the original director return for what is being called Harry Potter 20th Anniversary: Return to Hogwarts, but so will the entire cast including Daniel Radcliffe, Rupert Grint, and Emma Watson who play the main protagonists. It is not just the main protagonists who are making an appearance for the reunion, but fan favorites like Evanna Lynch who played Luna, and Robbie Coltrane who played Hagrid are set to return as well. Even multiple BAFTA and academy award winner Gary Oldman will return to talk about his role as one of Harry’s closest companions in the series. In addition to the returning cast, everyone will be returning to the Hogwarts grounds and other sets for the first time in years to talk about the feelings and experiences involved in creating one of the most popular stories to be told.

This event will be live on January 1st:

To bring in the new year and will be available to stream that day on HBO Max is Harry Potter 20th Anniversary Reunion. As a way to celebrate the release of the new Fantastic Beasts: Secrets of Dumbledore the anniversary special will also be aired on Cartoon Network and TBS in spring before the release of the new film. Various teasers and trailers for the event have been released and circulated by the cast including Emma Watson who wrote a heartfelt post on her Twitter page about the experiences she cherishes from making the movies. It is clear that all of the cast still have fond feelings for the franchise and seeing the main group of friends talk about the bonds they’ve established between each other on set should be magical to see and listen to. It also appears that the set itself will return for the anniversary special with segments of the cast interviews taking place in the Gryffindor common room, as well as promotional shots that feature the famous Platform 9 ¾, the Hogwarts Train, and Hogwarts castle itself. David Heyman is set to appear in the special along with the director Chris Columbus who are posed to share their own stories of what it was like trying to find the right actors and right scenery for the movie that would fit the characters and settings of the book.

Any Harry Potter fan looking to catch this fantastic event should tune in on New Year’s day for a celebration of two decades of Harry Potter fandom. While Harry’s story may have concluded for the most part with the final entry of the series “Harry Potter and the Deathly Hallows” new books, movies and even games are being created with the original author’s consent and input. The Fantastic Beasts series of movies goes into more of the history of the world and the origins of characters like Dumbledore and Grindelwald but also explores the wizarding world in other countries other than the original British setting. The anniversary special will air on January 1st, 2022, and again at an unspecified date and time during the spring to celebrate the release of the new Fantastic Beasts movie.