While the “Elf on the Shelf” has just four more days of watching good girls and boys for Santa, EARS the Astronaut (www.facebook.com/earstheastronaut), a new character imagined by animation studio TRICK 3D, has launched as a free game in the Apple AppStore.

Atlanta-based TRICK 3D brought both “Elf on the Shelf” and “EARS the Astronaut” to life to engage and entertain children ages 3 and up around the world.  The first person flying application allows gamers to maneuver quickly and freely by dragging a finger across the screen, a method designed and created by TRICK 3D.

TRICK 3D founder Chad Eikhoff first learned about EARS the Astronaut through the imagination of his daughter, Evie, who was just five years old at the time.  Evie told her dad a story about a cat named EARS who wanted to be an astronaut and venture to Marshmallow Moon.  Hear Evie tell the story, and sing the theme song, via EARS on YouTube. 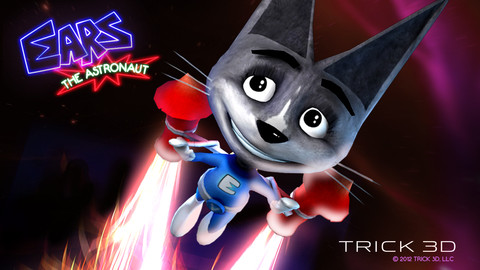 Fearless and independent, EARS jets through the galaxy collecting stars which can then be used to acquire new equipment.  EARS earns extra stars for making wise food choices, such as carrots and apples, while avoiding sugary distractions like cakes and cookies. Like any young astronaut EARS is fueled by healthy choices. Young gamers will quickly learn the strategic moves needed to propel EARS through the galaxy, as well as distinguishing his persona through the seven fun, out-of-this-world fashion selections: suits named Bolt, Lucky, Iron Cat and Chicken. Explorers even have the opportunity to upgrade their “jetpack” by purchasing “EV1”, the “Manta-RAYcer” or the “ACME Red Rocket.”

“The Elf on the Shelf’ brand allowed us to have a chance to create a Christmas classic, which hadn’t been done successfully in over 50 years.  I believe our success with ‘An Elf’s Story’ is due largely to sticking to fun kid friendly content that engages parents and children.  EARS the Astronaut is another way for parents and kids to have fun together using the latest mobile technology. The kids picking up some healthy eating choices along the way is a nice bonus,” said Chad Eikhoff – TRICK 3D founder.  “As a free app, we can introduce this inspiring character globally, just in time for parents searching for fun, positive games for their children and themselves over the holiday break and beyond.”

To download the free app EARS the Astronaut, visit https://itunes.apple.com, or visit EARS at www.trick3D.com and on YouTube. Compatible with iPhone 3GS, 4, 4S and 5; iPod touch (3rd, 4thand 5th generation), and iPad. EARS requires iOS 5.1 or later. This app is optimized for iPhone 5.