As a parent one of the worst moments in my life is when one of my children is injured. Yesterday this came to full blow near panic attack when the school called me just 30 minutes before the home bell would ring to say my D feel off the monkey bars and they needed me to come take him to the doctor immediately. My heart sunk as I knew right away this meant bad news.

Upon arrival I could her my 5 years old crying before I even opened the office door. I peered in already terrified of what had happened to see D gasping for air as he continued to cry. The nurse said he fell off the monkey bars and she was sure it was broken. So I loaded my guy up in the suv and rushed off to the emergency room a few blocks away.

We were seen right away and hurried off to a room, so they could take D’s vitals. Upon inspection and after questioning it was apparent that we did in fact have our first bone break and they ordered x-rays and pain meds.

The x-ray room was like hell as my baby boy kept screaming mommy don’t let them hurt me anymore. Then a few seconds later it was a crying scream, “Please mommy help me!” My heart plumped to the floor with each word knowing their was nothing I could do but reassure they would make it better.

After the x-ray, we were whisked back in to the room and the typically whispers between nurse and doctor began. This always makes the situation worse for me as the worry just builds as you know something is worse than they first thought. Then the news came in……

Ulna is broke in half and one part is cutting into the inside of his arm causing tearing and possible nerve issues. The ulna also caused a server dislocation of the radius and we need to get him into surgery as soon as possible so that he does not lose use of his elbow for the rest of his life.

Seriously, at this point I was nearly in tears but thankful held strong. A few seconds later they arrived with more pain meds and said that they would continue to help manage the pain till the surgeon arrived. They brought a half a dozen consent forms in for me to sign and then started prepping my guy for the big S.

As he continued to cry and scream (three hours after arrival), my personal physician came in from out-of-town to examine him herself before surgery. Within 15 minutes of her completion, my D was given a good dose or morphine and off to dream land he went. Thank goodness for doctors who truly care about their patients and their families.

The surgeon came in and explained what need to be reset, popped back in place and possible area of entry. Then I was told it would take 15-20 minutes and to please sit in the surgery waiting area. At right at the 48 minute mark the surgeon entered the room and gave me a tad bit of good news; he was able to set the bones without opening D up. *a sigh of relief* He said he ordered a CT of the area to get a 360 degree look to ensure his work was precise.  Then he caution me that their was a lot of tearing and still the issue of nerve damage. They would not be able to know for sure what the extent of this would be till his one week followup and D was under strict orders to be a lazy boy (no playing, no bumping, no jumping, no school). He said they would come get me soon to go up to recovery.

Nearly two hours later, I was pacing, pacing and pacing more back and forth in this room waiting on news from my guy. What could be taking so long? Then the phones in the surrounding rooms rand and rang. Finally the cleaning lady came in and said that would be for me. I answered to hear that DD did not want to wake up and that it would be a few more minutes. They told me to go on up to his room on the third floor and they would follow soon.

When I walked onto the recovery floor the entire mood was completely different. The nurses and assistants were so friendly and reassuring. They brought me a sandwich and some food for D to have when he arrived and got to moving around. About an a half hour later my guy arrived still knocked out. In the next 15 minutes the CT tech arrived to take him away from me again. I barely even got to touch his check and make sure he was still breathing. 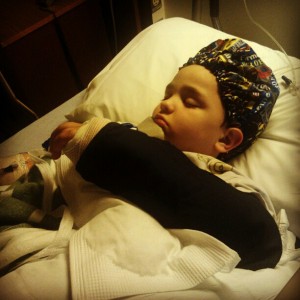 I think the nurses could see the mental pain I was in as they urged me to lay down and watch a little TV. I did as instructed though it didn’t seem to really help at all. After all they were tornadoes touching down in the surrounding areas and consistent news broadcasts and warning noises never help calm a situation. After a little thought I realized I must look like a total wreck. So I got up and washed my face which was surprisingly calming. Then grabbed a cup of coffee to help get me through the night.

Soon after I could hear the sound of my D’s voice coming down the hall. I know my face must have lite up as this relief rushed through me. It was like this heavy weight was lifted and I knew my guy was okay. In he came smiling, saying he missed me. Gosh how much I love my big boy. We chatted back and forth and he asked to watch cartoons. Within 30 minutes he was asking for food and needing to pee.

I mean from the time my guy got back in the room till the time we were out of that place went by so fast. He did magnificent after surgery. He pressed the nurse button each time he needed help to the restroom and was so sweet to everyone around. They sent me home with instructions and what I thought was a pretty hefty pain medicine for such a little guy. Again the wonderful staff reassured me it was what he would need for pain; reminding me that he did have a lot of tearing and it was okay for him to take the meds as needed.

After we arrived home, he got a little ill from the ride and requested to sleep with mom. Of course, I let him. We didn’t make it through the 3rd chapter of Green Lantern before we both were in zonked out. The next morning he slept way longer than me and seems to be doing better.