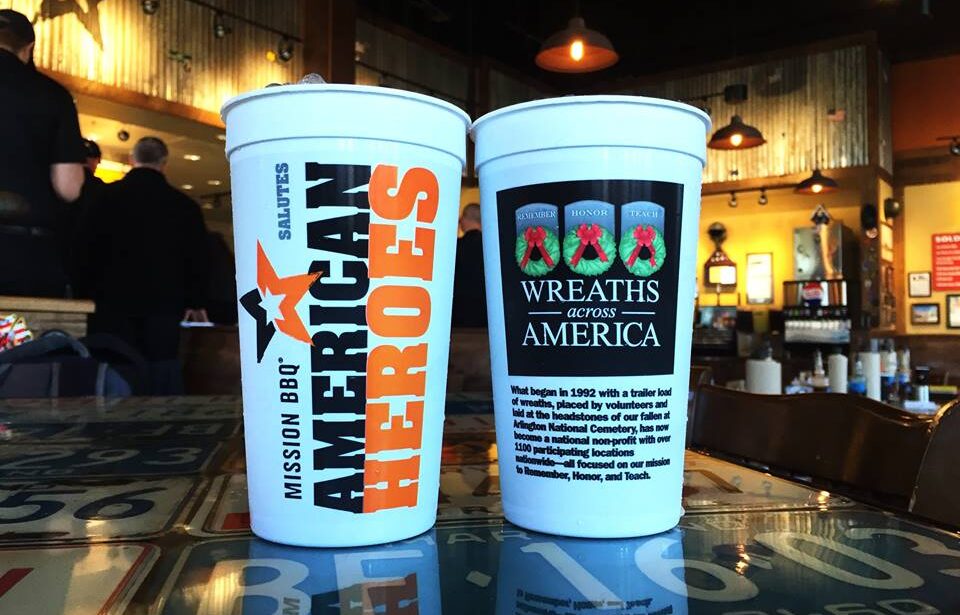 Starting Saturday, Nov. 12, through the end of 2022, for every American Heroes Cup purchased at any of MISSION BBQ’s 121 locations, $2 will be donated to WAA to sponsor veterans’ wreaths. In 2021, MISSION BBQ customers raised $550,920 for WAA through its American Heroes Cup campaign, sponsoring the placement of more than 36,700 veterans’ wreaths in memory of our nation’s veterans – these wreaths will be placed by volunteers at more than 90 participating cemeteries this year on National Wreaths Across America Day – Saturday, Dec. 17, 2022.

To celebrate the start of this annual campaign, MISSION BBQ’s Clarksville, Tenn., restaurant will host the WAA Mobile Education Exhibit for a free public event from 11am-4pm on Saturday, Nov. 12. The exhibit serves as a mobile museum, educating visitors about the service and sacrifice of our nation’s heroes as well as serving as an official ‘welcome home’ station for our nation’s Vietnam Veterans.

“We owe everything to our nation’s veterans, who have risked all that a person can to defend and protect this country,” said Bill Kraus, co-founder of MISSION BBQ. “It’s an honor to provide support to Wreaths Across America in remembering the fallen and thanking military families for their sacrifices.”

Bill Kraus and Steve Newton opened the first MISSION BBQ restaurant in a Baltimore suburb in 2011, on the 10th anniversary of the Sept. 11 terror attacks. In opening the restaurant, they sought to Serve, Honor and Thank American heroes for their sacrifices and service by donating a significant portion of the restaurant’s profits to the community’s military non-profit groups and charity organizations that support police officers and firefighters. Since its founding in 2011, MISSION BBQ has opened 120 additional locations in 18 states.

Wreaths Across America is the non-profit organization best known for placing wreaths on veterans’ headstones at Arlington National Cemetery. In 2021, the organization placed more than 2.4 million sponsored veterans’ wreaths at over 3,100 participating locations nationwide. The organization’s yearlong mission is to Remember the fallen, Honor those who serve, and Teach the next generation the value of freedom.

“MISSION BBQ demonstrates the WAA mission in how they conduct business in the communities they serve,” said Karen Worcester, executive director of Wreaths Across America.  “Sharing stories of American heroes, treating our nation’s veterans with the dignity and respect they deserve, while teaching the next generation, every day. We are honored to be a program worthy of their support and grateful for their customers who continue to live this mission in their communities across the country.”

American Heroes Cups are available year-round, currently retailing at $4.99 with $2 of every cup purchased donated to a charity supporting veterans and first responders. Now through December 31, 2022, proceeds from the American Heroes Cups will be donated to WAA. Customers are encouraged to bring back their American Heroes Cup on return visits to the restaurant to receive $.99 refills. To find a MISSION BBQ location near you visit: https://mission-bbq.com/locations.

MISSION BBQ opened its doors for business on September 11, 2011. We believe there is nothing more American than BBQ. And nobody more American than the brave men and women who have sworn to protect and serve Our Communities and Our Country. We do what we do for the love of our soldiers, firefighters, police officers, and first responders—all our loved ones in service. We set across this great land from Texas to Kansas City, the Carolinas to St. Louis…to discover the secrets of great BBQ. Every day we strive to serve you authentic BBQ made from the freshest, most delectable ingredients, and serve it to you in a patriotic dining room filled with tributes to those who’ve made Our Country great, given to us by the people who earned them. Stop by at lunchtime, and you might catch us during our daily salute to the Stars and Stripes.

About Wreaths Across America

Wreaths Across America is a 501(c)(3) nonprofit organization founded to continue and expand the annual wreath-laying ceremony at Arlington National Cemetery begun by Maine businessman Morrill Worcester in 1992. The organization’s mission – Remember, Honor, Teach – is carried out in part each year by coordinating wreath-laying ceremonies in December at Arlington, as well as at hundreds of veterans’ cemeteries and other locations in all 50 states and beyond.

For more information or to sponsor a wreath, please visit www.wreathsacrossamerica.org.