The Happiest Place on Earth is now even happier  with the addition of Cars Land, the largest piece of the five-year expansion at Disney California Adventure Park. Cars Land features 12 acres of immersive excitement, offering freewheeling fun for everyone as it brings the town of Radiator Springs to life, just as guests remember it from the Disney●Pixar movie “Cars.”

The thrilling additions of Cars Land, Buena Vista Street and the Carthay Circle Theatre, home of the Carthay Circle Restaurant and Lounge at Disney California Adventure add to the storytelling magic of the Disneyland Resort, a world-class, family  vacation destination in Southern California with two theme parks, three hotels and the Downtown Disney shopping and dining district.

“The crown jewel of our Disney California Adventure expansion, Cars Land is the extraordinary result of a close collaboration between the gifted filmmakers at Pixar Animation Studios and our talented Imagineers and cast members,” said Bob Iger, chairman and chief executive officer of The Walt Disney Company. “It’s also a spectacular example of our ability to take our characters and stories and bring them to life in new and unexpected ways.”

“More than five years ago, we embarked on a journey to realize Bob Iger’s vision of transforming Disney California Adventure with new attractions featuring our most iconic characters, including Mater, Lightning McQueen and the residents of Radiator Springs,” said Tom Staggs, chairman of Walt Disney Parks and Resorts. “Cars Land immerses guests in the world of ‘Cars’ like never before and combines the imagination of Pixar with the creativity, innovation and legendary storytelling that are the hallmarks of a Disney Parks experience.” 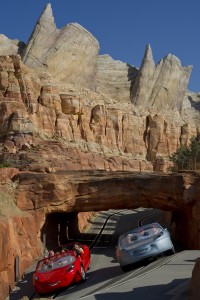 Cars Land invites guests to take the off ramp right into Radiator Springs, “the cutest little town in Carburetor County,” where they will enjoy three family attractions showcasing places and characters from the movie: Luigi’s Flying Tires, Mater’s Junkyard Jamboree and Radiator Springs Racers, one of the largest and most elaborate attractions created for a Disney theme park.

Themed shops and restaurants also look familiar to fans of the movie, including Flo’s V8 Café, Cozy Cone Motel and Ramone’s House of Body Art. The Radiator Springs locals are at home, so Lightning McQueen and Mater make appearances and pose for photos near the Cozy Cone Motel.

“We want guests to think they are on this great road trip and, in a way, almost like they are going home,” said Kathy Mangum, executive producer of Cars Land. “Cars Land will feel very familiar in so many different ways. I can’t tell you how many people have seen it and said ‘I can’t believe I am in Anaheim.”

Each attraction and facility will have its own personality, allowing guests to get to know more about the characters who live in Radiator Springs.

“A lot of the places you will find only inside Cars Land, so we took the theming and storytelling all the way through, in a way that guests will really feel as if the shops, restaurants and attractions are being operated by  that character,” Mangum said. “Everywhere you look there is a funny little car nod. After all, it is a land built by cars.”

“While I love all of the movies we’ve made at Pixar, the ‘Cars’ films are particularly close to my heart, so seeing Radiator Springs come to life at Disney California Adventure is a dream come true,” said John Lasseter, Chief Creative Officer, Pixar and Walt Disney Animation Studios. “The artistry and attention to detail throughout Cars Land is absolutely incredible, and I couldn’t be more proud of the teams at Pixar and Walt Disney Imagineering who worked side-by-side to make this project a reality.”

The “Cars” gang gathers to prepare visitors for the big race in Radiator Springs Racers, the high-octane, indoor/outdoor adventure that revs through the beautiful mountains of Ornament Valley. Guests board cars, each with their own personality, for a scenic road trip that takes them through Radiator Springs, with a stop at either Luigi’s Casa Della Tires or Ramone’s House of Body Art. After getting some final racing tips from Doc Hudson, the cars zoom over the roadways in a nose-to-nose, high-speed race, never knowing which car may win.

Elsewhere in Cars Land, Luigi invites guests to test-drive his new shipment of Fettuccini-brand “Cuscino D’Aria” tires – which are just like riding on air (or being on an enormous air hockey table).  At this festival of flying tires, riders lean left and right aboard Luigi’s Flying Tires, floating and bumping along in a 21st century attraction reminiscent of the classic Disneyland Flying Saucers attraction. Festive music adds to the fun.

Mater provides his own unique siren song, courtesy of a Junkyard Jukebox that has lured baby tractors into Mater’s Junkyard Jamboree. There, the tractors dance to Mater’s hoedown tune, swinging guests around in trailers they are pulling behind them. It’s a “tow-si-do” square dance to a playlist of seven songs sung by Mater himself.

The streets of Radiator Springs are humming with entertainment, too. DJ, the ultimate party car -– a big road-trippin’ mobile boom box with giant speakers and built-in disc changer – invites his crew to “DJ’s Dance ‘n Drive,” a spontaneous, interactive dance party. And Red the Fire Truck recruits guests of all ages to join “Red to the Rescue!” – helping water the flowers and clean up the town of Radiator Springs. (Prepare to get wet!)

The road leading into Cars Land is dotted with large animated neon signs reminiscent of the ‘50s era of cross-country travel along Route 66. As with other aspects of the land, the neon signs are three-dimensional representations of recognizable landmarks from the movie “Cars,” and they come to life each night at sundown when it’s cruisin’ time along the boulevard.

“Cars” fans and other interested shoppers will find a great selection of Cars Land and other Disney and Disney●Pixar gifts and souvenirs at the “local” retail shops in Radiator Springs.  Although the interiors of most of these locales weren’t seen in the movie, they were created for Cars Land by Walt Disney Imagineers with their characteristic attention to detail, drawing on inspiration from vintage stops along historic Route 66. 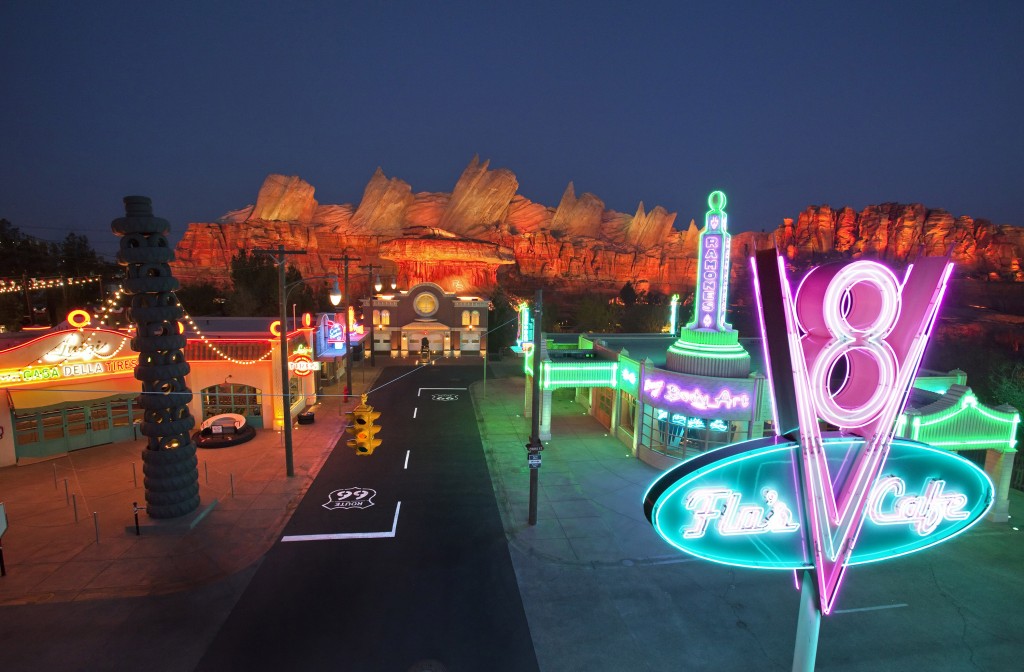 Dining options in Cars Land include Flo’s V8 Café, modeled on the quirky roadside eateries along old Route 66. The café serves full meals from a quick-service counter. A windowed “showroom” dining area and adjoining outdoor patio offer a breathtaking view of Cadillac Mountain Range and the vehicles zooming by in Radiator Springs Racers. Breakfast, lunch and dinner are served at Flo’s, and specialties include chicken tamale with scrambled eggs, brioche French toast with salted caramel and bananas, home-style rotisserie classics such as pork loin or New York strip loin, plus the house-made Pie-O-Rama for dessert.

About the Disneyland Resort