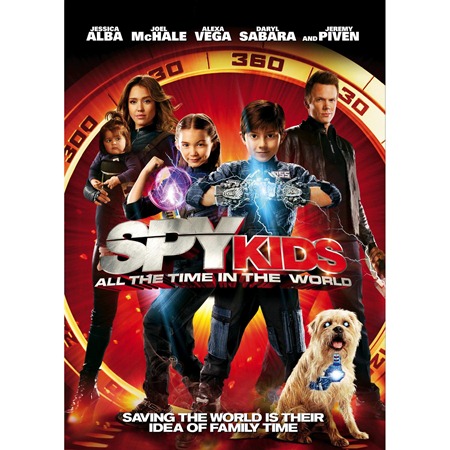 The action packed franchise is back…with the next generation of Spy Kids! Marissa Cortez Wilson (Jessica Alba) has it all: married to a famous spy-hunting television reporter (Joel McHale), with a new baby and intelligent twin step kids, Rebecca (Rowan Blanchard) and Cecil (Mason Cook). When the maniacal Timekeeper (Jeremy Piven) disrupts her domestic bliss—threatening to take over the planet—Marissa comes out of retirement as a top secret agent. With Armageddon quickly approaching, Rebecca and Cecil are thrust into action! With a little help from some familiar Spy Kids friends, Carmen (Alexa Vega), Juni (Daryl Sabara), their faithful dog Argonaut (Ricky Gervais) and some mind-blowing gadgets, they just may be able to save the world!

The SPY KIDS: ALL THE TIME IN THE WORLD Blu-ray™ and DVD bonus features include an interview with director Robert Rodriguez; a “Spy Kids Passing the Torch” featurette; a “Spy Gadgets” clip; deleted scenes; and more! Note: Special features are subject to change.

Learn more about SPY KIDS: ALL THE TIME IN THE WORLD at: www.spykidsmovie.net

What the Momma thinks….

Every since the release of the first Spy Kids, we have been loyal fans purchasing each movie as they became available. The character change was different but a much needed breath of fresh air for the film. I do like how they kept Carmen and Juni in the film but allowed them to grow into young adults. Jessica Alba did a fantastic job as a mom spy. Hum, if I could only catch sippy cups with my foot.

I sat with all three of my older children and watched the blu-ray from start to finish. For the most part they managed to stay seated and interested. That alone earns Spy Kids 4 a must buy in my book. 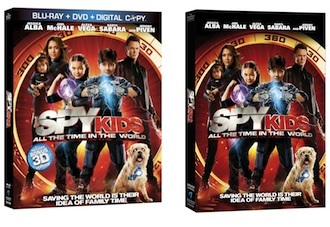 BUY IT: Purchase Spy Kids All the Time in the World on BluRay Combo Pack and DVD from Amazon.com and in stores where movies are sold.