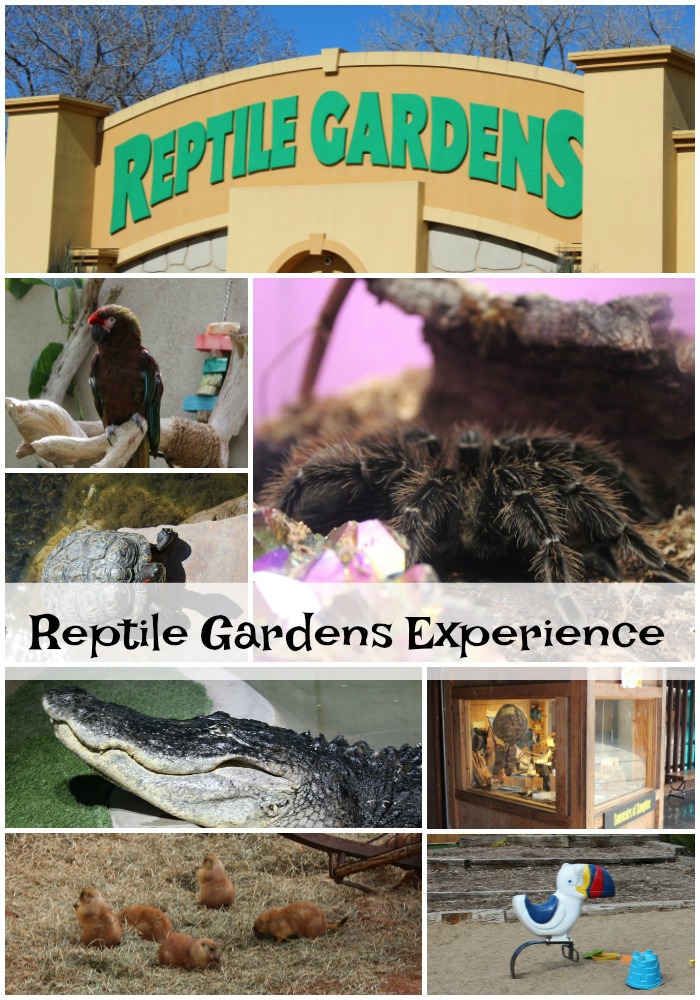 Reptile Gardens is well known after it’s feature on the National Geographic Channel and that attention is well deserve. As a former, yes former, ophidiophobia, I was a bit terrified to venture into the snake den especially when the snake show hosts boasts that when walking through the sky dome, you must look up and spot the python sun-bathing on the tree. Keep in mind, that the sky dome at Reptile Gardens is an open air area that allows species to roam at will in the same space as the visitors that walk in. Scary, right? 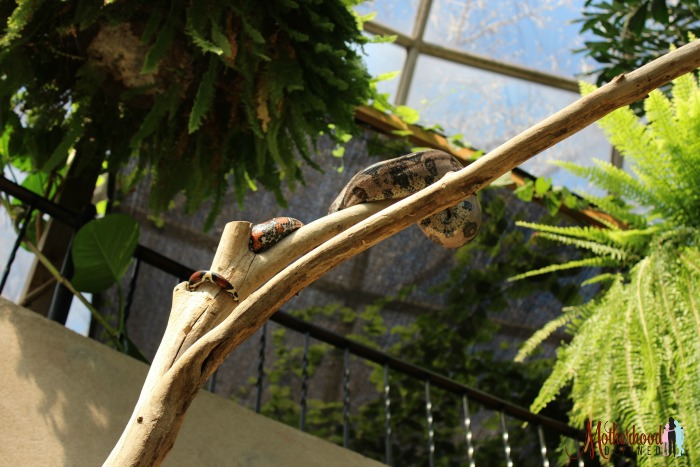 Before I get too far ahead of myself, I should tell you how we got to this place where both humans and reptiles come together to create a magnificent attraction that is a must to be seen. Reptile Gardens is a true once in a lifetime experience.

How It All Began 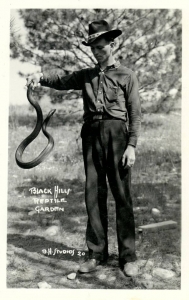 It all began by a born showman named Earl Brockelsby. At age 19, he worked as a tour guide at a Black Hills attraction called Hidden City. The owner of that now-closed tourist destination claimed the unique geological formation was actually an ancient civilization. It wasn’t, but Brockelsby spun the narrative for the summer of 1935 anyway. Wearing a big Stetson cowboy hat, he guided groups through the “city” and then took his hat off nonchalantly at the end seemingly to wipe his brow. On top of his head, coiled up, would sit one of Brockelsby’s pet rattlesnakes. Ekk!

“At that point in the tour, people wanted to know about rattlesnakes, reptiles or the nutcase who would have one on top of his head,” said Brockelsby’s son, Johnny. “That’s what gave him the seed of an idea. Whether people hated them or not, there was a fascination.”

Two years later, at the height of the Great Depression, Brockelsby became one of the founding fathers of South Dakota tourism when he opened Reptile Gardens. He started with a $400 loan co-signed by his father, a handful of snakes indigenous to South Dakota and a vision. Eighty years later, Reptile Gardens in Rapid City holds the world’s largest collection of reptiles. 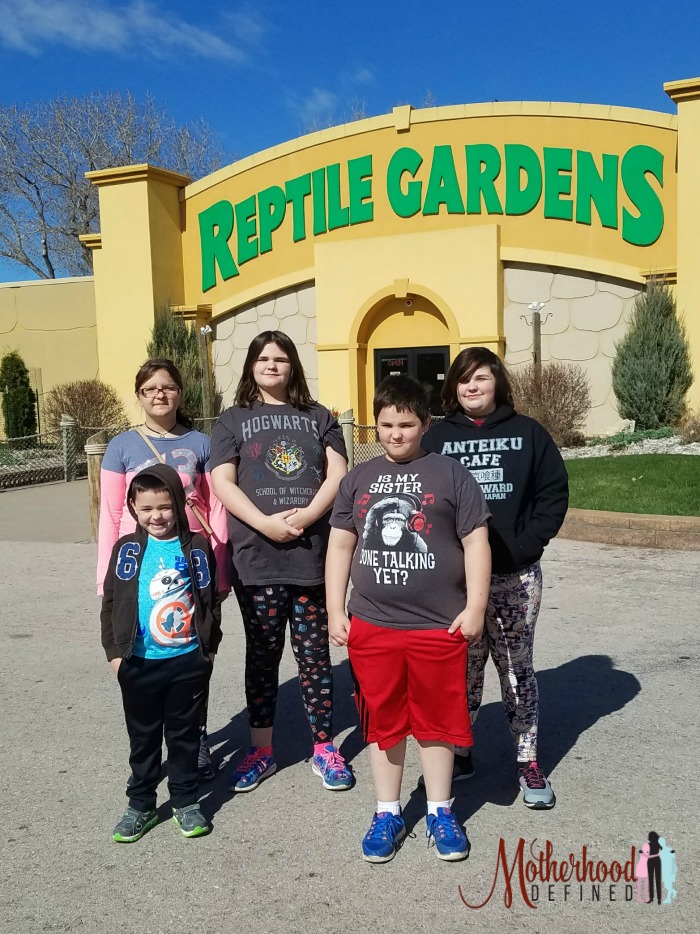 This story is what lead us to follow the road into Rapid City, South Dakota and into this magical reptile home. In fact, Reptile Gardens has grown to include more than 200 species and subspecies of reptiles and more than 1,000 animals. Each one will delight the senses of all ages and help break any of those lingering fears of these beloved creatures. At least, it broke my fear.

First on our list of discovery was to catch both the available education shows. What a better way to learn that to hear it first hand from experts that spend most of their working days with these beautiful animals? Well, other than the traditional way of spending hundreds of hours of study which may never get you in view sight and definitely not close enough to touch. 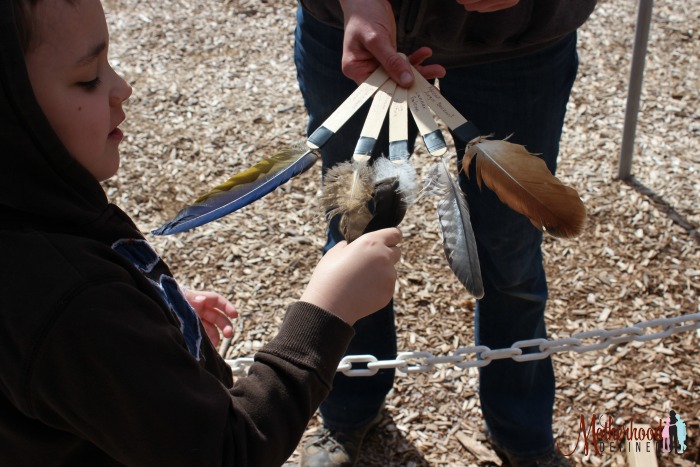 One of the bird show stars, a stunning European Barn Owl, was quiet the character. Her attitude was one to be rivaled and a treat didn’t really seam to make a difference. She would look upon the crowd with grace and spread her wings almost upon command as the daily keeper chatted about her habits and capabilities. She is just one of the many species of birds Reptile Gardens houses. 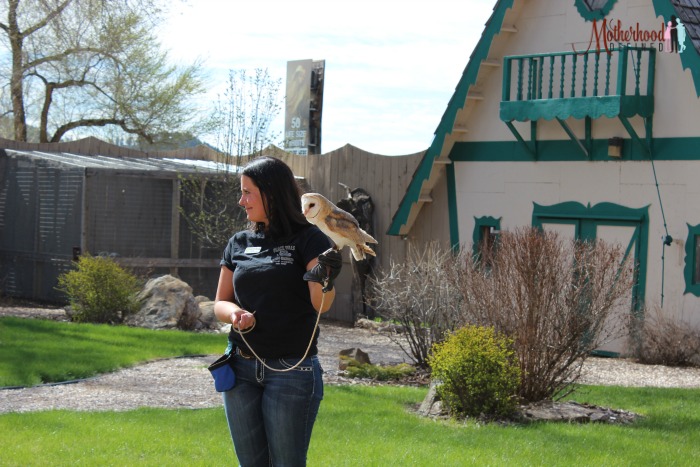 Just a few facts we learned about the European Barn Owl. They eat mostly small mammals, particularly rats, mice, and other rodents. Most of the prey they devour are active at night, so that is their prime hunting hours. They are silent and deadly predators that hunt on buoyant wingbeats in open fields and meadows. Unlike other owl species, they are not hoot noise makers but can be found by listening for eerie, raspy calls. Spooky! 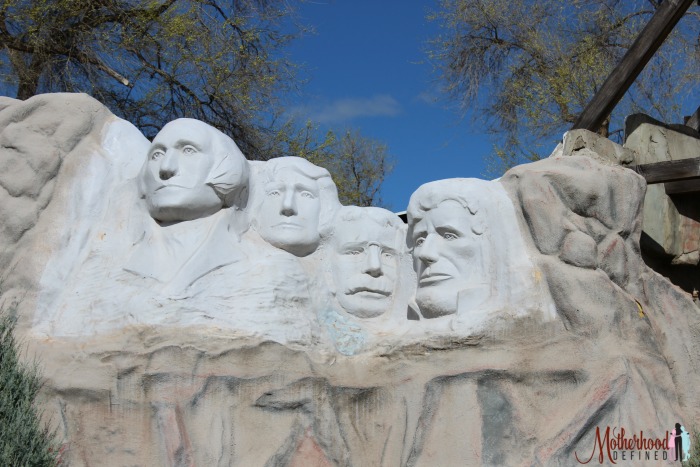 Next up was to catch the snake show, however there was so much to see between including a small replica of Mount Rushmore. This is a great stop for a photo memory. 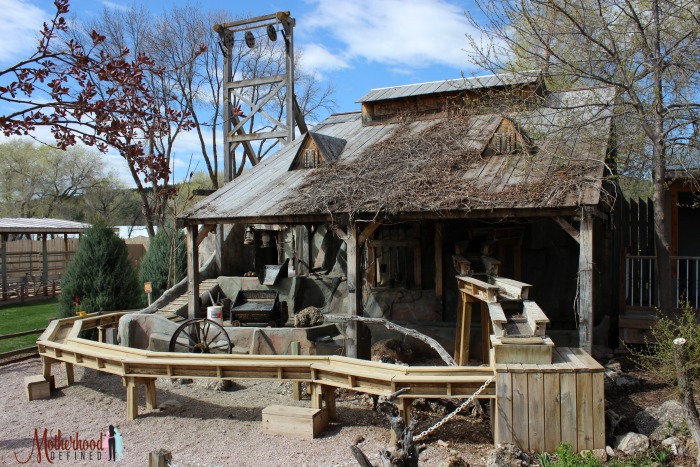 A rock mine wash can also be found on the property. If you have never taken advantage of this activity, you are missing out. My kids absolutely love washing for stones and gold. In fact, these rocks are one of there most loved treasures. They also make wise souvenirs as these can be used in teaching geology, history and make a pretty collectibles. 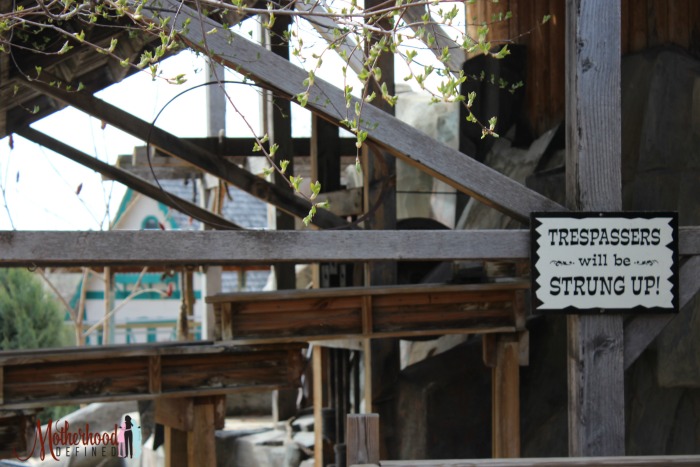 You can find small bits of humor along the way at Reptile Gardens. As you walk through, look closely and you might just get a unexpected laugh. 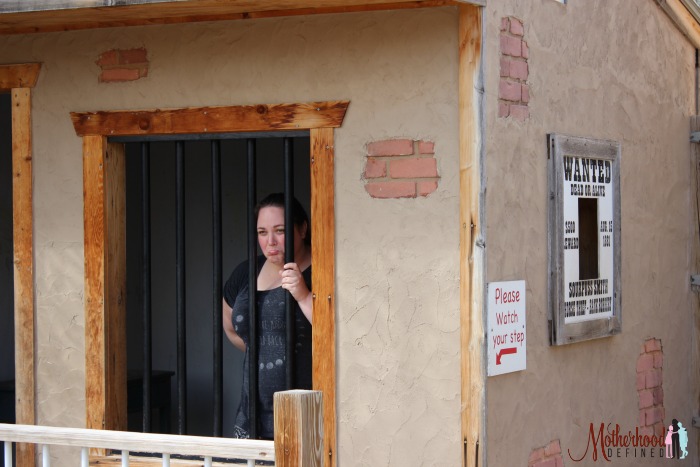 Take a few minutes to create a photo memory or two at the jail. Create a poster. Just have fun. Fun at an experience that excludes their attention on electronics. Even if only for a little while. 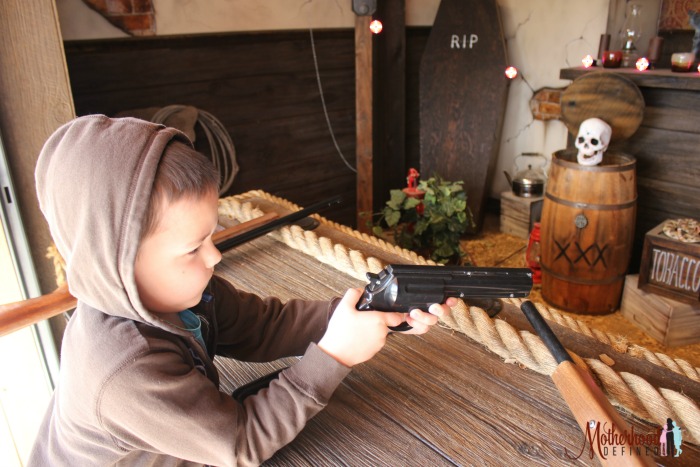 Blow off a little steam and prove you are the best at the local shooting range. Take out the skeleton in a bucket, the guy hidden behind the bar, the local sheriff and blow the entire place with a little TNT. 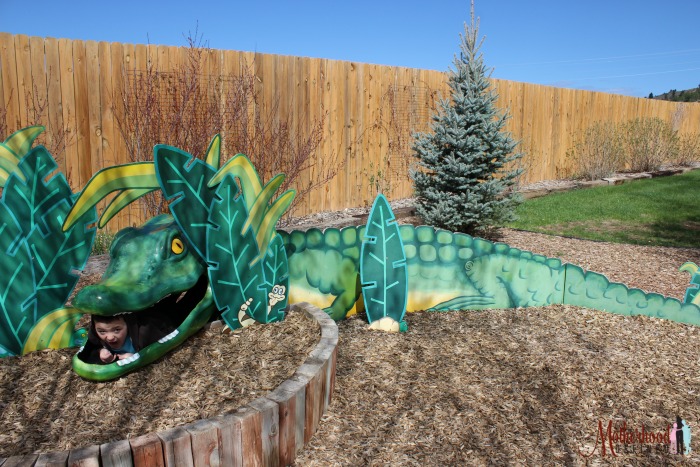 Catch a ride on a dinosaur. Then, get swallowed up by an alligator! Methuselah Playground is a great area for little ones to run off some energy. You will be glad you took the time to make this stop while on your Reptile Gardens journey. 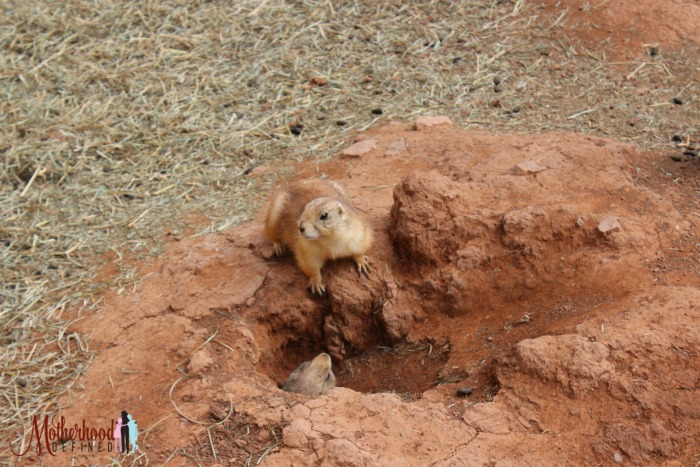 Satisfy your awe moments with the cute and cuddly at Prairie Dog Town. These little guys are active and love to play all day. I could stand there for hours to watch and photo these adorable creatures. Yes, I am in love! 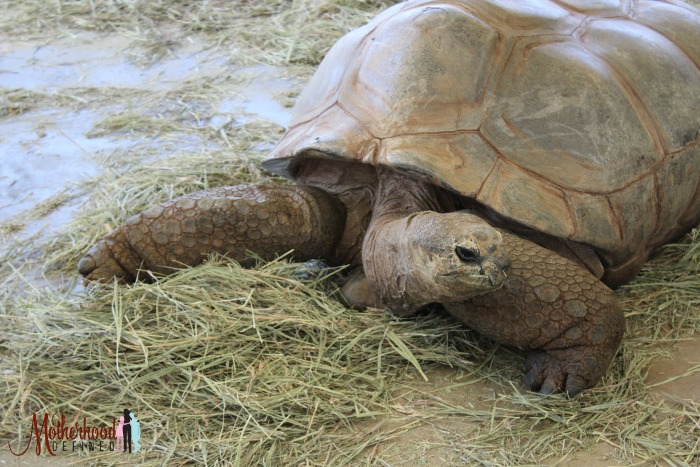 Peek in at the giant tortoises. They love posing for the camera and are almost always up for a view. These guys are massive yet seem so gentle despite their shell being composed of hard, bone plates covered by scutes. That’s one tough cookie to crack.

Tortoises have life spans comparable with that of humans and some are even known to have lived longer than 150 years or more! In fact, earliest known turtles date from 215 million years ago making them older than lizards and snakes! 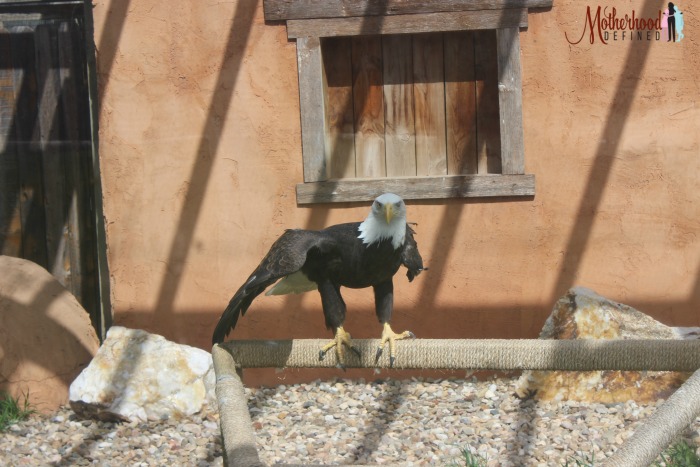 Cheyenne the Bald Eagle is a must see when visiting. For many of us, it will be the only time in our lives we get to see one of her bread. She became an avian ambassador at Reptile Gardens in 2001, with the permission of the US Fish & Wildlife Service.

This beautiful creature was found in the wild near Grand Island, Nebraska with a severely broken wing. She was then rushed to a veterinarian specializing in raptor care and after several surgeries, part of the wing had to be amputated. As a result she is permanently flightless and is now living her life in comfort at Reptile Gardens. 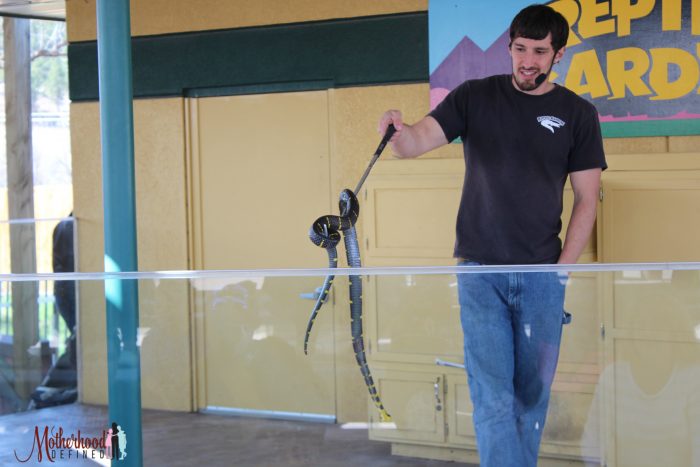 We got up-close-and-personal with the reptile show to learn about a variety of different snakes housed at Reptile Gardens. I will say this show was filled with a great deal of information and humor. It was a fun experience for all of us, parents and children a like.

During our snake handling demonstration, you could tell the handler was less than happy with some of the natural behaviors of the poisonous sidekicks he wrangled. I am thinking he might have even been on the bad end of a strike or two at one time and doesn’t want a repeat in front of a crowd. It definitely takes a brave one to work with these magnificent yet deadly reptiles. 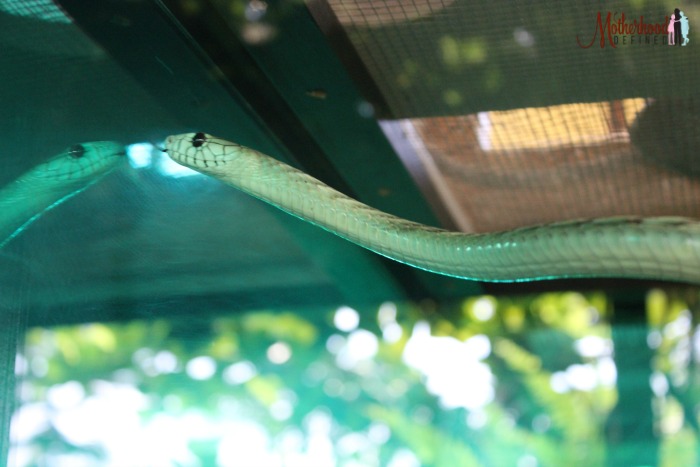 We saved the best for last, a famous three-level Sky Dome. This is by far the most iconic building at Reptile Gardens that houses a tropical oasis filled with rare & unique flora and fauna, snakes, crocs, amphibian and bugs! There is so much to see under this dome, we couldn’t fit it all in one paragraph. To be continued….

How you visited Reptile Gardens? What was your favorite attraction?