For years we have lived in a home with the lingering stinky baby smell. You know the mixture of dirty diapers and day old milk. Even though I am a decently good housekeeper, having 4 young children in the home make it impossible to completely get rid of that odor. For sometime I have been airing out my home on warmer days and using air fresheners to mask the scent. Then I was introduced to PureAyre Odor Eliminator for Baby. 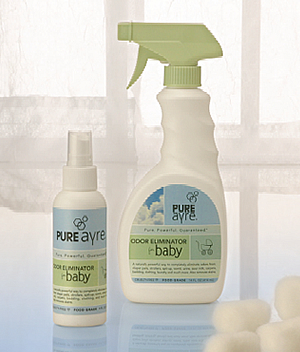 I am not going to tell you that is was a magical solution because it wasn’t. I however was impressed with the improvement over time with consistent use on cleaning days {2 times weekly}. Here are a few ways we put PureAyre Odor Eliminator for Baby to the test:

Diaper Pail: This is one of the largest areas of smelly smells in my home. Even now that my children have aged, I still have a tot that is potty training. Thus we have the occasional wet or poopie pullup. Since we have few accidents than when he was a baby, the diapers tend to sit in the pail longer than our previous average. This adds to the lingering not so pleasant scent. So I started using the PureAyre Odor Eliminator for Baby around the lid and on the inner lining of the pail between bag changes. It seems to help help hold the odor problem in during extended use time.

Carseat: I don’t know about you, but I completely despise how difficult it is to get the cloth cover out of my child’s carseat. Even worse is getting it put back in correctly and positioned to what it once was. Since I am one of those moms that allow sippy cups and small snacks on road trips, I find that spills and yucky happens more often than I like to admit. Of course we have had the occasional vomit and pee accident over the years. The carseat is my favorite place to use the PureAyre Odor Eliminator for Baby. I keep the 4oz size in my van at all times. In fact we are on our second bottle this year. After cleaning with a soft cloth, I lightly spritz my son’s seat and let dry. By the next day, the smell is usually nearly or completely gone. This method is also useful in strollers.

Mattress: Sweat, urine, secret spilled drinks and more seem to plague my children’s bedroom mattresses. While this was the last use I though of for PureAyre Odor Eliminator for Baby, it has been an effective one. Of course using PureAyre only assists with the smell leaving the stain if any behind. I suggest using a little soap and water first to try and get out the coloring and mess, then do an all over odor eliminator spray with each bedding change. This method seems to have extended the life of their mattresses and improves the air in their room.

PureAyre is composed of plant-derived enzymes, purified water and essential oils. It is the first and only food-grade odor eliminator. That’s why it’s safe. It is the only product with enzymes specifically targeted to break the bonds of all odor-causing compounds found in nature. That’s why it’s strong.

PureAyre has the ability to eliminate every home odor. The NZ enzyme technology found in PureAyre cleave the bonds of the molecules that make up these odor-causing compounds. Making this the only product that contains all the enzymes needed in a high enough concentration to do the job. As a result, PureAyre literally cleans the air and permanently gets rid of the source of odors leaving you with pure air. Yes,you can truly smell the difference. PureAyre is the versatile odor eliminator that can be sprayed, poured, injected and fogged to turn odors into non-toxic, innocuous compounds. Lots of options for something so safe and effective.

Purchase your Odor Eliminator for Baby from The PureAyre Store.

One lucky winner will receive a PureAyre Odor Eliminator for Baby {including both the 4oz & 14oz}!

Giveaway ends April 25th at 11:59pm, open to US residents, ages 18+. To enter please use the Rafflecopter form below. Good luck.

Disclosure: I receive sample(s) from for purpose of testing and review. My opinions are my own and may differ from those of your own. I am disclosing this in accordance with the Federal Trade Commission’s 16 CFR, Part 255: “Guides Concerning the Use of Endorsements and Testimonials in Advertising.”

Contact [email protected] with questions, to have your review seen on Mom to Bed by 8 or to see your business or blog featured on the next big event!