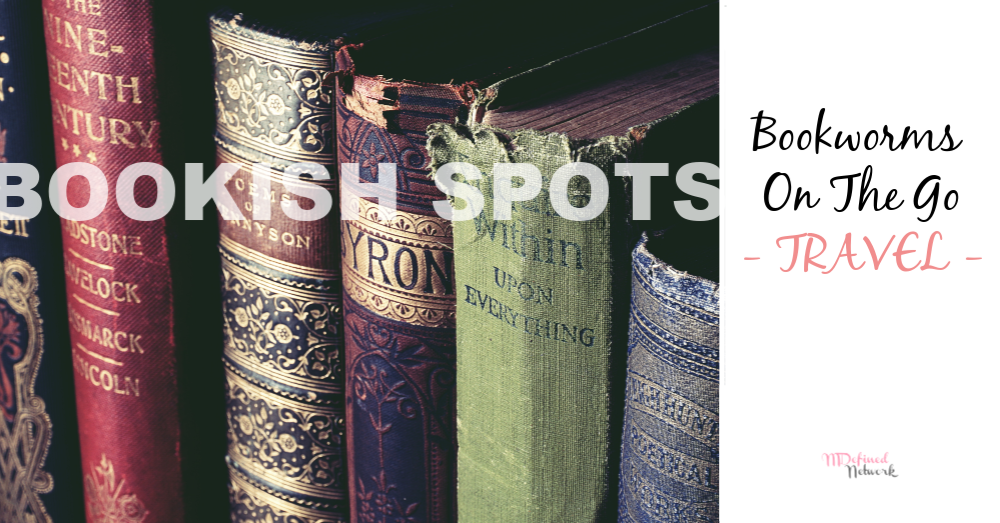 Apart from bookstores, libraries and comfortable armchairs where book lovers can enjoy their favorite readings and explore new authors while sipping a cup of tea or hot chocolate, the world offers amazing literary spots that are attractive holiday destinations for literature lovers. If you’re planning a trip, take a look at the beautiful bookish spots listed below and add them to your travel bucket list.

Literary Destinations in the United States

The United States are home of many incredible authors that have captivated readers for ages with their intriguing, well written,and entertaining stories. William Faulkner, Tennessee Williams, Mark Twain or Sylvia Plath to mention a few of them are some of the talented writers that can be related to different cities in the United States.

That said, what can be nicer and more exciting to a bookworm on the go to visit some of the locations where these authors found inspiration, developed their stories or where they were born and lived? Let’s explore some of them!

If you have a couple of weeks to spare, Massachusetts is a great destination for book lovers as there are many cities that just thrive with literary references. Travelers can rent a car and visit the different book-related attractions comfortably and at their own pace. They only have to remember to pack some interesting books and to buy a rental car damage insurance policy so that you can enjoy a safe trip.

Edgar Allan Poe, Sylvia Plath or Jack Kerouac are some of the talented writers somehow related to Boston, Massachusetts. The literary scene in the city is wonderful and inspiring with its many bookshops, libraries and its impressive Boston Public Library.

While in Massachusetts, head to the west of the state as it is a paradise for bookworms. There, you’ll be able to visit Edith Wharton’s beautiful state, Herman Melville’s house, a replica of Nathaniel Hawthorne’s cottage and W.E.B. Dubuois’ home. And everything is surrounded by stunning nature.

If you are a fan of XIX century American literature, spending some days in Concord is a must. You can find The Ralph Waldo Emerson House or the Orchard House where Louisa May Alcott wrote “Little Women”.

Visit Amherst and visit the Emily Dickinson Museum, which is the result of the merged properties of two houses that the poet called home.

Tennessee Williams, Anne Rice and William Faulkner once called New Orleans their home. And book lovers can nowadays experience the vibrant spirits of these authors if you include New Orleans in your travel plans. The city’s French Quarter has plenty of charming bookstores, and in many of them you can find that rare book you’ve been searching for ages. If you’re lucky enough you can plan your visit for when the New Orleans Literary Festival takes place. Created in honor to Tennessee Williams, it’s a great experience for book lovers.

If you’ve watched “Little House on the Prairie”, then a visit to Mansfield, in Missouri, is a perfect family vacation that won’t break your budget. You can start your trip at the Laura Ingalls Wilder / Rose Wilder Lane Historic Home and Museum, where visitors can appreciate hundreds of artifacts that belonged to Ingalls’ and Wilder’s families, Pa’s fiddle, Laura’s keepsakes and even handwritten manuscripts of the Little House books.

Literary Destinations in the British Isles

As the homeland of talented and prestigious novelists and playwrights such as William Shakespeare, James Joyce, Charles Dickens, Mary Shelley or Sir Arthur Conan Doyle, the British Isles just need to be in the travel bucket list of book lovers.

English literature wouldn’t have been the same without William Shakespeare and his deep, complex characters that describe human nature so well: Hamlet, Romeo and Juliet, Lady Macbeth or Othello just to mention a few of them. That said, you can experience what Shakespeare’s plays looked like back in time at Shakespeare’s Globe. Located in London, it is a reconstruction of Shakespeare’s famous theatre. The building itself is stunning as it was exquisitely developed to resemble the ancient Globe Theater.

Those interested in seeing more of Shakespeare can catch a train a ride to Stratford-Upon-Avon, his birthplace. You can visit the house where he was born and where he lived with Anne Hathaway, his wife.

Back in London, take the tube to 221b Baker Street and enter the Sherlock Holmes Museum. There you can appreciate the home of the fictional detective created by Sir Arthur Conan Doyle. Each room is furnished according to Doyle’s novels.

If you are into XIX century English literature, then you’ll probably enjoy a visit to Charles Dickens Museum. It’s placed in Dicken’s house and it offers you a great opportunity to explore his everyday life, his desk and study where some of his most famous novels were written.

The romantic city of Bath is also a cherished destination for bookworms as it is the place where Jane Austen wrote Northanger Abbey and Persuasion. Don’t miss Jane Austen Centre, a museum with costumed tours and nice tea services.

Fans of Agatha Christie and of her novels full of mystery and murders will definitely enjoy Devon. The city not only offers great beaches for all the family to enjoy, stunning views and a peaceful countryside but also the Agatha Christie literary trail where you can discover the places that inspired the settings in the Poirot and Miss Marple series.

Travel to Scotland, especially to the Orkney Islands, and see with your own eyes the haunting environment where Mary Shelley found inspiration to finish her famous novel “Frankenstein”

Now, take a flight to Dublin, Ireland and admire the stunning library that serves both Trinity College and the University of Dublin. It’s not only the largest in Ireland but also one of the most impressive in the world. You’ll want to pay special attention to .the Old Library with its 65-meter-long chamber that houses over 200 thousand manuscripts and books.

The romantic city of Paris, with its bridges over the river Seine, the Eiffel Tower, its impressive ancient buildings and world-famous museums full of invaluable works of art and artifacts is also an attractive literary destination that won’t be unnoticeable for book lovers. Let’s unveil some of them!

Honoré de Balzac was a French novelist and is now considered one of the founders of realism in European literature. At the Maison de Balzac, his former home, literature lovers can explore a library of his manuscripts, illustrations and books and grasp why Honoré de Balzac inspired so many writers after him such as Oscar Wilde, Charles Dickens or Edgar Allan Poe.

Victor Hugo is considered one of the masters of French literature. He created The Hunchback of Notre-Dame and Les Miserables amongst other famous writings. Nowadays, bookworms can tour the home of Victor Hugo, the room where he died as well as the rest of the house. Don’t miss the impressive library where you can see letters and manuscripts. There are plenty of Victor Hugo’s personal belongings in the museum, including his collection of Chinese art.

Even though the fascinating Musée Carnavalet is not dedicated to literature, it should definitely be included by book lovers in any literary tour around Paris. There you can see a reconstruction of the cork-lined room where Marcel Proust worked on “In Search of Lost Time” in his belief that this lining would absorb dust and stop his asthma.

No trip to Paris would be complete without enjoying a true Parisian experience and tradition: sip a cup of coffee at a café while looking at the people passing by. Book lovers can take this experience to the next level not only by pairing that coffee with a delicious croissant but also by grabbing a drink at Les Deux Magots.

Les Deux Magots was one of the cafés where the literary community in Paris gathered. Located just across the street from Café de Flore, they both had an impressive and prominent clientele that would definitely ring a bell to book lovers: Rimbaud, Verlaine, Hemingway or Simone de Beauvoir are just some of them.