Andie MacDowell has been a leading lady in Hollywood since her small role in St. Elmo’s Fire in 1985. From there, MacDowell has appeared in an array of hits, including Sex, Lies, and Videotape, Groundhog Day, Four Weddings and a Funeral, Michael, Muppets from Space and now The 5th Quarter.

Directed by Rick Bieber, The 5th Quarter takes a closer look a family dealing with the shocking and tragic car crash that took their young son’s life. Based on a true story and a recent recipient of the Dove Foundation’s “Family-Approved” seal for all audiences over the age of 12, comes this inspiring true story of family, faith and football. Aidan Quinn (Legends of the Fall, A Shine of Rainbows) and MacDowell deliver emotionally stirring performances as the real mother and father of Jon Abbate, a rising football star at Wake Forest University. 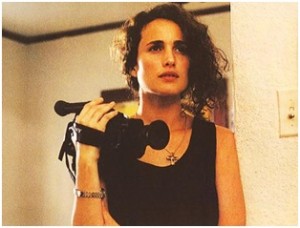 In Steven Soderbergh’s acclaimed drama, MacDowell plays the quiet and subdued Ann Bishop Mullany, wife to John (Peter Gallagher). When she discovers that John is having an affair with her more outgoing and spontaneous sister Cynthia (Laura San Giacomo), she becomes closer to the mysterious newcomer in town Graham Dalton (James Spader). Graham has an interesting hobby that Ann decides to partake in—interviewing various women about very personal things. 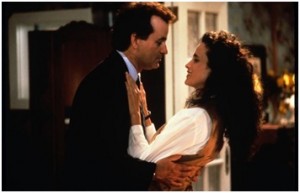 Opposite Phil (Bill Murray), the famous weatherman who must relive the same Groundhog Day over and over again, is love interest Rita, played by MacDowell. At first, Phil tries to have fun with the ability of knowing “the future” as it were, but soon, he becomes frustrated contemplating a life that never leaves one day, city and his surroundings. Often making critics’ top comedies lists, Groundhog Day is a classic tale of discovering what’s important in life and changing ones ways—even if it takes lots of repetition for it to work. 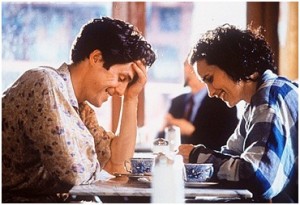 Starring romantic comedy leading man himself Hugh Grant, Four Weddings and a Funeral gave audiences on this side of the pond a taste of what the UK already knew—Grants’ fun-loving charm. Grant is Charles, a member of a British group of friends who continue to bump into each other and intersect each others lives at events of life and death. One of the people he continues to see is Carrie (MacDowell), an American who he is instantly drawn to. 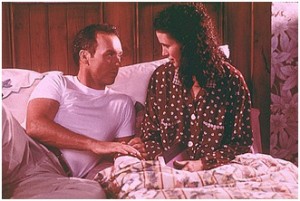 Michael Keaton is Doug Kinney…and also several additional versions of himself. When he stops having time for his wife Laura (MacDowell) and daughter Jennifer, he takes the offer from a geneticist to clone himself. At first, it works perfectly, but with all comedies of this proportion, things go awry pretty quickly, and the clones begin to develop minds of their own. 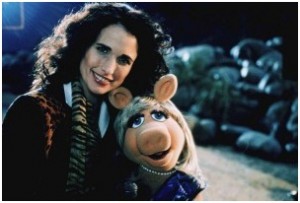 After Gonzo is contacted by his alien family via his breakfast cereal, Kermit and Muppet pals must work to help Gonzo find his long-lost family. The family film stars MacDowell as Shelley Snipes, a reporter tracking the story of the aliens. Also appearing in Muppets From Space are Rob Schneider, Josh Charles, Ray Liotta, David Arquette and Kathy Griffin.